Home » About Me » Nutrition » Self Portrait » Fine Tuning 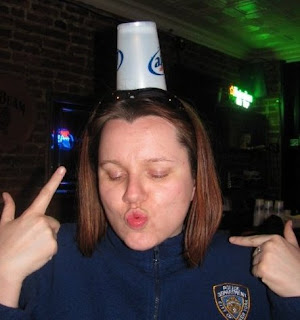 How many times do I have to say it?  If I want to lose weight, I have to stop drinking.

I at least am avoiding the binge drinking habits that are a staple of summer (thanks to the ridiculous heat that makes me want to live inside of a watermelon) and being more moderate.

I don't want to feel guilty for wanting to have a drink with friends, but it's when I have two and a half glasses of wine at 10pm at a bar while I'm eating my dinner (salad and a side of mac & cheese that i ate 1/3 of because it was so soupy.  Boo hiss.).  And this was after drinking a sugary, unsatisfying strawberry daiquiri at the baseball game.

I wanted the first glass of wine.  The bartender bought me the 2nd glass of wine, and then topped off the half before I could stop him.  I had a plan going in to have one glass, but it went south very fast.  I shouldn't have been eating that late (I was hungry, though) and I shouldn't have gone to a bar.  I broke 2 of my three FCAs (focus correction areas) in one sitting!

I want to stress that I am not an alcoholic.  It is something i'm aware of, as it is on both sides of my family.  What I am is a 28 y/o that enjoys a drink or two in the right context.  BUT i have already said that my priority is losing weight, going to the gym, and becoming healthy.  Drinking is contrary to this.
Tweet
Labels: About Me, Nutrition, Self Portrait

I feel SO similarly. I'm not willing to give up drinking but...I've definitely cut back a lot already. It's tough to strike the balance though!

I think the easiest thing for me to tackle was quantity.... now i focus on quality. 1 good beer vs. 4 crappy beers.

I agree drinking is probably the hardest to give up - its so much damn fun!

I do enjoy drinking wine and vodka and a few other things... but i think part of the reason I drink is because people are more entertaining when I'm drunk. When I'm sober, I'm bored as hell in a bar.