in About Me - on 12:46:00 PM - 2 comments
This past Thursday night/Friday morning I awoke the most awful cacophony (like a flock of woodpeckers using jackhammers) coming from my kitchen.  Two to three times an hour my refrigerator would make this noise for about ten minutes and then shut off with a few loud thuds. I called for a repair person right away to confirm what I thought was the problem (I'm not an expert, but I'm pretty good at using the internet):  the refrigerator's compressor was on its last legs.

I wrote a thorough email to my landlord explaining what was going on.  His response was, well...less than hospitable, shall we say? So in addition to having to sleep with earplugs, in addition to having my sleep interrupted multiple times a night (*yawn*), I now may have the joy of having to find a new place to live (after 5 years in the same apartment).

I'm almost done with physical therapy (for my back/hips/neck).  I need to keep up with all these exercises and stretches. My therapist focused on the fact that there's not a lot of flexibility in my hip (tendinitis).  Many of my supporting/core muscles were so busy trying to compensate for my hips/back to the point that they weren't keeping me aligned/stabilized as best as they could.  (I know, that screams that I need to start doing yoga.) But the short of the long of it is that I'm feeling a bit better.  Getting back to having fewer bad days and more good ones.  Hopefully they're spent outside...which brings me to....

When I first got my lower back diagnosis, I was told to not ride a bike because of the compression/shock to my lower back.  So I sold my mountain bike (*wipes tear from eye* I miss you Raleigh M30) and gave up on the idea of biking. In the years since, I've learned to ignore most of the things doctors have told me (1) because I know my body pretty well and (2) I have to live my life, come what may.  With that in mind, I bought myself a membership to Capital Bikeshare. So far I've done 5 rentals and have had a blast. I forgot how much I love riding a bike.  (Does anyone have a fun/fashionable helmet that they like? I'm looking at this Giro helmet.)

Read more
Labels: About Me

in Media, spine - on 6:40:00 PM - 3 comments
I am super proud of and excited for all of my dear friends that get recognized in the media (print, tv, web, etc.) for all their hard work, stories of triumph, or their commitment to the health/wellness/fitness community.

My great accomplishment? Always fighting for myself -- for my diagnosis and my treatment.  For that, GW Health News asked me to tell my story for their Spring 2014 newsletter: 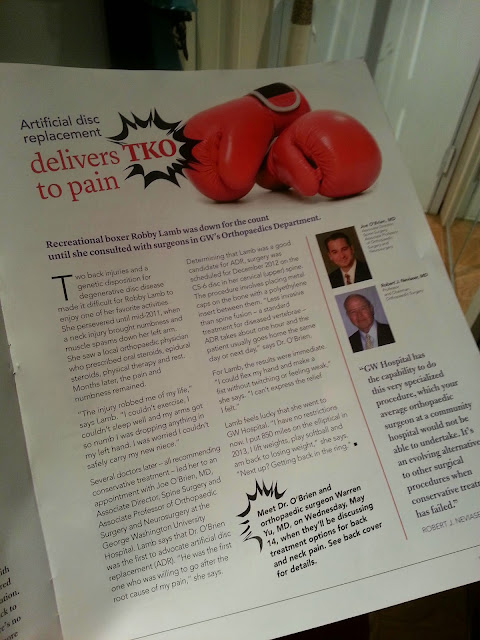 Nota bene:  for anyone in the DC/MD/VA area that might be experiencing back pain -- Drs. Joseph O'Brien and Warren Yu will be hosting an info session regarding orthopedic options to get some pain relief.  Register Here:  http://www.gwhospital.com/community-information/education-seminars-and-lectures
Read more
Labels: Media, spine

in About Me - on 11:52:00 AM - 9 comments
A long time ago (okay, it wasn't a long time ago, but it felt like it),  I wrote a blog post called "The Sound of Silence" about what it means when bloggers go quiet.  In good circumstances, a blogger might declare that they are no longer for the blogging world and are choosing to focus on other aspects of their life.  But far too often, people just fall off the radar because blogging is the least of their worries.


My silence is because I'm in a bad place.

2013 was pretty good:  I got stronger and faster after my artificial disc replacement surgery.
2014 has been crap so far. My cat, Spike, died after nearly a year of twice-a-day insulin injections, complications, and a rather quick demise.  And then I fell in the shower (not a slip and fall, just gravity exerting itself on me) on what was supposed to be an awesome night (Alton Brown Live!).

I now go to physical therapy twice a week to address the lingering issues.  Yesterday, my therapist kicked my ass.  She was testing the range of motion in my hips as well as the alignment of my back and hips.  Result? I need a tune-up.  I came home from PT feeling a bit nauseated (pain does that), with a mild headache, and all I wanted was to crawl in bed.  I woke up this morning more sore and in more pain than last night.

I try to be a happy, upbeat person, but at this point I've been dealing with back injuries for half my life (I first injured my back when I was 16 and I'm 32 now).  There are going to be days where optimism is just not a choice; it requires too much energy and rose-colored blinders.  There are days when optimism gives way to not pessimism but doubt and resentment.

This past weekend, Facebook and Twitter were abuzz with springtime races, family photos from gatherings, baby announcements, vacation photos, honeymoon photos, engagement announcements.  I doubt whether I'll ever be able to shift from the day-to-day struggles to actually being able to enjoy life.  It's hard to think about things like dating, or the possibility of marriage and/or kids when I'm struggling to put on my underwear or having to psych myself up to picking up something that I've dropped.