Crashing in to the Finish Line

I want to say that 2018 has not been a banner year for me or my blog, but the truth is that while there have been good days and bad, I also know how very lucky I am and have been. If you have followed me on Twitter or Instagram, you'll already know that on September 11, 2018, I had my third, and hopefully final, foot surgery.  This was the BIG ONE:  ankle ligament re-stabilization (from the damage of having my feet run over by a SUV).

I lovingly call this my "shark bite" -- but the surgery was three main steps (along with cleaning up some scar tissue): 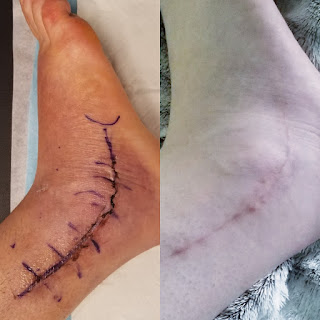 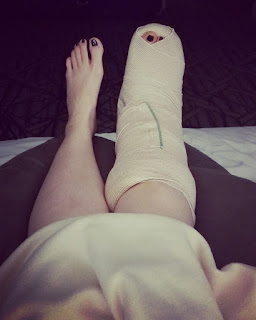 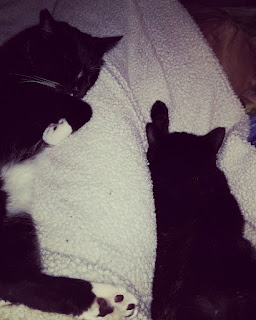 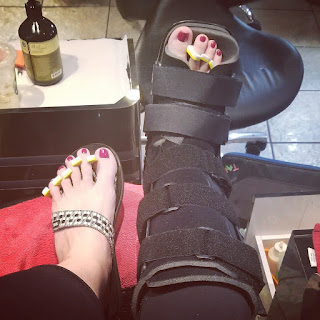 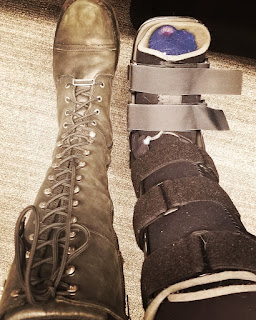 And eventually, though still quite swollen and dealing with edema, my stitches were removed (which meant I could start PT!): 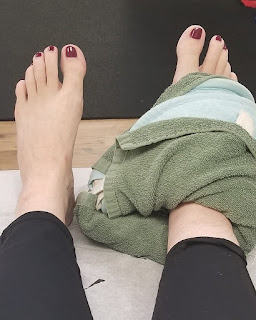 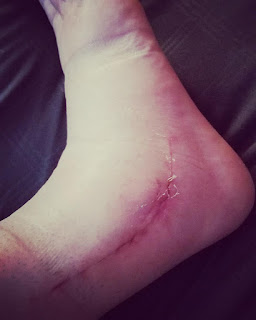 And while I love the iWalk, by the end I was so tired of using it and the toll it took on the rest of my body: 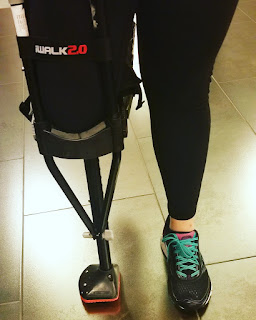 And was thrilled that by day 50, I was able to start walking without the boot and in a brace: 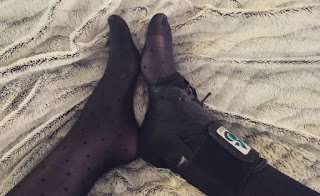 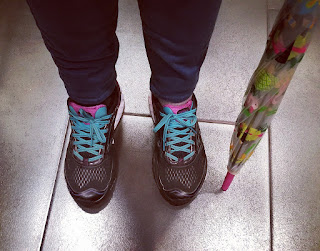 Did I forget to mention that just a few days before my surgery, my apartment building flooded and it was raining inside my bathroom?  Oh yeah.  So in the middle of this Very Serious Surgery™, I also had to contend with a rather chaotic home situation that included 7 industrial fans and one very large industrial dehumidifier (and all of their cords) in my small apartment, and the threat of mold growth while healing a rather large surgical site.  FUN TIMES!!! ((And as of today, the building's insurance still hasn't fixed it--83 days!))

How do things stand now? I'm doing well in physical therapy, but I have one spot under my ankle that is giving me trouble. It's really tight and angry and loves to hold the rest of my foot hostage. But I'm steadily progressing. The biggest challenge with physical rehabilitation is holding myself back and knowing that while I might feel great now, that I need to pace myself. My goal is to be able to earn my Beat The Blerch and do 5 continuous km on the elliptical before year end.  My ortho made a face when I said this, but my physical therapist thinks it's possible.

Every day I go to the gym or to physical therapy, I tell myself that I'm doing it so Tom Wilson can teach me how to ice skate. I know it's silly and that Tom probably thinks I'm a nutjob, but sometimes you need to be reminded that you're a fighter, that you're the enforcer of your own life.  He's my honey badger.

At the beginning of this entry, I said 2018 has had some ups and downs. This is one victory that I am fairly proud of, with semi-unrelated photo to illustrate things:

My lowest adult weight was 188, back in 2010 for my best friend Nancy's wedding.  And believe me -- I killed myself to get there.

Eight years, 5 surgeries (neck, back, 1 left foot, 2 right foot), and 1 Celiac diagnosis, and my weight has pretty much stayed in the 200-210 range with little-to-no exercise and kinda reverting to my emotional eating habits.  Contrary to my fears, I didn't go back to 240 (my highest weight) the minute I stopped running, or stopped counting calories, or stopped weighing myself. 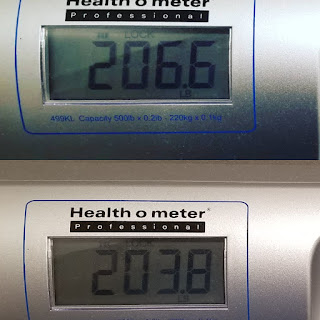 My hope is that in 2019, I make a good honest go of seeing what my body can do now that doctors have put me back together again.  I still have some digestive issues, and a few physical issues, but nothing that precludes me from getting back into some type of exercise routine with proper nutritional support. It has been like driving around and not realizing that you have the emergency break on. I've taken the emergency brake off and I'm ready to gradually accelerate. 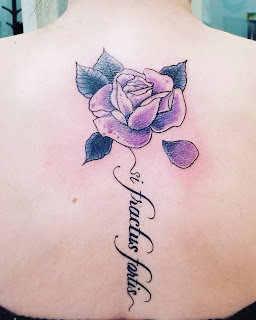 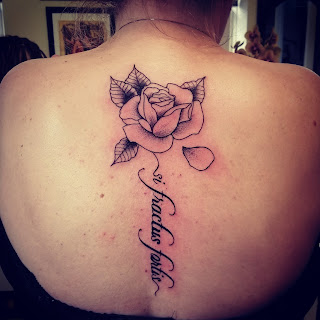 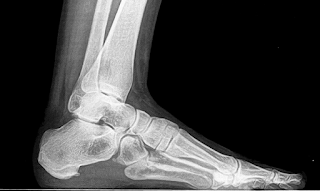 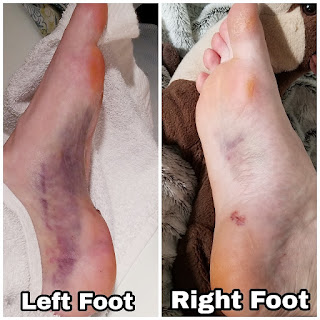 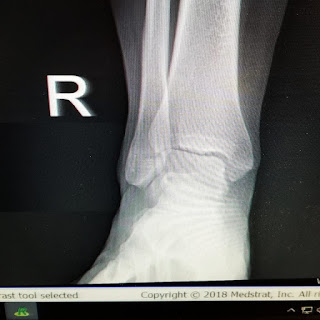 Sorry for not blogging more, but I really do feel like a broken record.  Or a broken broken record.  I thought 3 years, 3 surgeries was a bit much and repetitive.  I can't imagine what 3 years and 4 surgeries would make me sound like.
Read more
Labels: Health

in Family, Ruminations - on 2:23:00 PM - No comments
Yes, I know it's been a long time since I've blogged (June 2017 to be exact).  I have been stuck in the same feedback loop of injury, recovery, [bonus obstacle!], injury, recovery.  Reporting back and forth on that cycle doesn't seem very exciting.  But a big THANK YOU to everyone who has kept be buoyed up during my rough patches over the past 2 years.  I can only hope to return the kindness one day.

I still have the heel spur reduction/plantar fasciotomy on my right foot to look forward to (the last surgery was for my left foot).  Doctor and I had hoped to do both in quick succession, but the nerves in my foot had other plans. 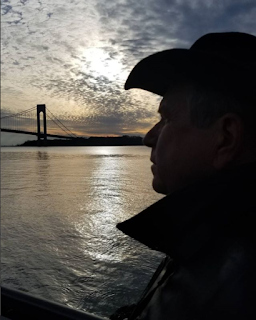 Got this amazing photo of him looking out on the Narrows.  Had a lot of long talks and good times.  But (without going into too much detail) it's a reminder that sometimes when I'm going through a lot in my own life, that it's easier for me to focus on other people.

I hate using trite analogies -- but I need to put my oxygen mask on first.  It's not an "in case of a decrease in cabin pressure" type of situation; a "you're of more help to others if you help yourself first" thing:  my situation is more of a "girl, you are running on fumes, it's okay to take some air for yourself" kind of thing.

I'm good at taking care of myself in some ways ("adulting") and terrible at actually enjoying myself.  I find that my life is swinging from crisis to crisis. I need a better mode of travel through life. eh?

In past iterations, I took great care in choosing a theme for the month or year.  Sorry, my dear readers, I've run out of themes and/or brain power.  So instead of me setting a theme, I'll ask you:

How to Join #GoTheDist 2018:
1. Click on the SUMMARY PAGE (bookmarking it would be a good idea as you will be using it often).
2. Fill out the next available line on the "Summary" spreadsheet.  You are responsible for filling out your biographical information (columns A–D), your tracking modality and goal (columns E and F), your quarterly goals (columns G, J, M, and P), and your half-year and full-year rewards (columns U and W).
3. **CREATE YOUR INDIVIDUAL PAGE** (make a copy of the Blank tab).
4. Rename the tab "@[twitter name]" or if you don't have Twitter "[nickname]"

5. Fill out the sheet as you wish.  See step #8.
6. Update your own individual page as needed (if tracking is too hard, consider printing out your page and filling it out by hand and updating it online once a week). The total mileage will automatically be updated on the Summary tab as you report on your individual page.
7. Follow #GoTheDist on Twitter for support if you need it or to support others when they do, to announce achievements, and find new/old friends!

8. PLEASE DO NOT DELETE LINES OR TABS! Do not SORT.  If you want to add columns, please add them to the RIGHT of the page.  Please do NOT move your page around! You CAN bookmark your individual page using your browser to find it easily.
Read more
Labels: Family, Ruminations
Newer Posts Older Posts Home