"If FatGirlvsWorld runs a mile and her BodyMediaFit﻿ isn't around to record it,
does it burn a calorie?"

﻿In both cases, the philosophical answers are much more interesting than the answers that physics give us.

Normally, I take off my BodyMedia armband about an hour a day (while I'm in the shower and getting ready for work) to allow my arm to rest (the skin and underlying tissue) and for the device to charge.  I also take it off if I'm going into the pool or sauna.  I've taken it off for special occasions where I'm wearing a fancy dress and want to look sexy (though I'd wear it if they made me a Beadazzled armband). I've also taken it off when on vacation/traveling across country borders such as this past weekend when I went to Toronto, Canada to see Emily get married.  I left my BodyMedia armband at home and I haven't put it back on since.  Oh, and I haven't been food logging for the same amount of time..

Q:  If I don't wear my armband, and it doesn't record the expenditure, did I really do it?


A: Of course. Yes, a falling tree makes a sound. Yes, if you are active you burn calories.


But try telling that to my brain!! There are moments when I feel absolutely naked without my BodyMedia armband. I want to see my caloric expenditure after having an active day and running at the gym.

I'm a bit on edge about all of this.  I know that food logging and that knowing my calorie expenditure has helped me lose 50lbs.  But just because I'm not wearing the armband doesn't mean I don't have an idea of how many calories I'm burning.  I know when I'm being active and when I'm not.  My body feels and act differently when I'm doing what I'm supposed to be doing.  I know what running 5 miles feels like. I know how long it takes. I know it burns around 700 calories in my body.  But I'm at the point where I've realized taht the BodyMedia armband confirms what I know to be true.  It's not my crutch, it's my documentation.

So, am I playing Russian roulette by going off the radar, or am I trying to be more intuitive and trusting with this whole process?  I'll let you know.   But I can say with 100% confidence that I can only do this because I have 2.5 years of data from wearing the armband and food logging.

In other news, I'm starting to feel some neck pain and weakness creep back in my life.  This is ridiculously discouraging.  Every time I think I'm doing well and putting in the effort, I get a setback.  I don't want to have surgery until being the Bionic Woman is an option.  Until then all I can really do is mitigate the damage, and listen to what my body is telling me.

I'm also trying to be more open to meeting guys and dating, but it's hard when I'm not presenting the best version of myself that I know exists.  I know that's me projecting my own issues on them -- for all I know they think I'm a goddess.
Read more
Labels: BodyMediaFit 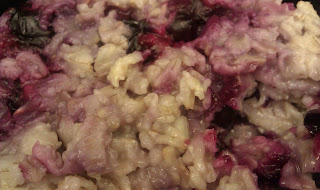 This is not a recipe. This is a philosophy.
This morning, I cooked my breakfast buck naked.
﻿
Why did I do this?

You can make love of yourself perfect at the same time you make a perfect breakfast for yourself.

Well you all know my love for naked time. ﻿ And you all know that breakfast is the most important meal of the day.  But I also just want to illustrate that you can multi-task self-care.  (Nota bene:  I don't encourage shaving your legs/face while running a marathon.  Make sure you put the blueberries in the oatmeal and the moisturizer on your skin.  Use a splatter screen if your breakfast involves bacon.)

I think it's important to do things like this as it creates a solid link in your brain that your behaviors and your self-image are intricately tied to each other.

So how do you multi-task your self care? ﻿
Read more
Labels: Food, Positive Self-Image 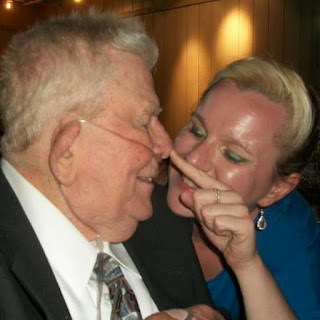 So...my grandpa died on July 26.  He was 85 years old.
To a certain extent, this was expected as his health was in decline.
The last time we spoke a month prior (at my cousin's wedding), he told me to "take care of [my] father" -- which I viewed as him issuing his final directive for how he wanted us to love each other.  I've taken this directive to heart.

As I stood by his open casket at the last of the three wakes (as it had taken that long to summoned forth what I wanted to say to him that would put a bow on a lifetime of memories) I said an emphatic "Thank you.  *sniff* Thank you.  *sniff* Thank you.  *sob*"  As the patriarch of my family, and as my last living grandparent, I just wanted to thank him for giving me my family, the greatest wealth I have in this world.  I also told him that as the champion of my love life (it was a frequent topic of our conversation) that I'd rely on him to send Mr. Right my way.

In the two weeks since my grandpa's death, the directive of "take care of your father" has caused me great anxiety and stress.  Having my mother die when I was young was traumatic in its own right, but one of the lasting results was the fear of my father dying prematurely because of his lifestyle (stressful job, bad diet, no exercise, etc.).

One thing you've all heard me say time and time again is that you can't force someone to care about themselves.  I know this first hand -- with myself and with others.  People have to come to the Epiphany in their own time and on their own terms.  You can be there to support and inform them, but the impetus has to begin within the person.

The weight of the stress/anxiety about my dad's health and well-being was taking its toll on me.  It dragged down my spirits, caused a bit of nausea, and people could see it.  All of this sadness was not a good prelude to my birthday.  My friends and coworkers could see that I was troubled.  Buddhists believe that suffering is caused by our desire to control (situations, outcomes, people).  Was I trying to control my father?   Ultimately no.  So then what?

On Tuesday, my father called me to wish me a happy birthday on the eve of my 31st birthday.  I took the call as a sign that it was time to share with him what it was that I truly wanted for my birthday:  I wanted my dad to live a long and healthy life, and I didn't want to have to worry about him.

Turns out it had been on his mind too.

I try not to be expressly didactic in my blog, rather trying to model what I think is healthy outlook on life by relaying anecdotes about my own life. But in this case, I'm really going to spell it out:  tell the people you love that you love them and want them to love themselves.  Asking someone to change for our own benefit is shallow and wrong, but telling someone that you want them to look at themselves with the love you have for them is courageous and generous of heart.

I want my dad to live a long life. I want him to do cartwheels down the aisle when I get married. I want him to see his grandkids grow up.   I said nothing about how many calories he should eat, or the kind of exercise he should be doing.  I tried not to harp about the negative behaviors.  My focus was on relaying the fact that I value our relationship and would hate to see that relationship come to a premature end because of how he treats his own body.

So with that one conversation, the gloomy clouds that had  been hovering above me dissipated.  While I was still very hush hush about my birthday because I'm still in a bit of aftershock/mourning, I know that my birthday wish is now out there in the universe.
Read more
Labels: About Me, Family
Newer Posts Older Posts Home