Home » About Me » Boxing » The Risks and Rewards of Change

The Risks and Rewards of Change

in About Me, Boxing - on 9:22:00 AM - 14 comments
Most of us have been there before -- on the edge of a cliff -- in the moments before we took the leap of faith that ultimately jump-started our life changing journeys (LCJs, to borrow Carver's terminology).  We have felt the terror and panic (no matter how large or small it seemed) of standing on that precipice, not knowing if we could jump and not knowing if we would land.


But we land.
Time and time again, we land.

I've been avoiding the edge for a while, and I can see the effect of that in my results.  I hit a plateau and have stayed there for a few months.  It's not that I forgot I could land, it's that just stopped jumping.  I had become complacent with running on the elliptical, doing a little treadmill work, and doing some weights.

On Tuesday, March 1, I jumped.  I marched my butt into LA Boxing, Georgetown. 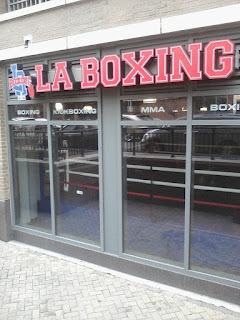 So, why a boxing gym? Why this gym?

Three reasons:
I returned to work on Tuesday with lots of information to mull over and a big decision on my hands.  Also, I wanted to talk with my prospective trainer first before I made any decisions.   We were able to coordinate a meeting for Saturday, March 5, at 2pm.  I spent the whole week giddy to be starting something new.

On Saturday, trainer Pat H. and I spent a while going over my history (exercise, health, injury, food, etc.), I introduced him to the blog (I wanted to make sure it was okay that I mentioned him), and our philosophies (though we differ in our NFL preferences).

As we train together I hope to be able to share some of Pat's wit and wisdom.  He inspires a great deal of confidence even after only meeting once.

However, we didn't chat for long.  He had me on the treadmill to warm up, and then wanted to see just what he was working with (namely, just what did my back do under stress and/or fatigue).  He was cool when I told him that I hit my limit during certain exercises, and was patient with me when I took things slow (I'd rather do something slow and right than fast and sloppy).   The hardest thing he had me do was something many people take for granted:  sit with my knees together!

As I mentioned in vlog #2, I can run on an elliptical til the cows come home.  I can bike a fairly long time.  I'm even starting to work in the treadmill (something the doctors never thought I'd be able to do).  Half an hour with Pat and I am still sore three days later.  Not a bad sore, but a "oh, yeah... I've been neglecting to do that" type of sore.  I hereby confess that I neglect many of the weight/strength elements of working out mainly because of fear.  I don't want to injure myself, but I know that strength training is just as important as cardio not only to lose the weight, but to improve overall fitness.

So without having even touched a punching bag or thrown a jab, I am very excited for my future as a boxer.  I know I have a lot of fight in me -- I just hope I am able to show Pat and myself how far I can take that fight.

After all, this is why we start LCJs -- because we know we are in the fight of our lives.  No longer are we fighting against ourselves.  We fight for ourselves.
Tweet
Labels: About Me, Boxing

Congrats!! I am very impressed with your willingness to step outside your comfort zone!! That is why I am playing football--TOTALLY out of my comfort zone!! Great job! I am looking forward to what Pat has in store for you next!

SMM -- OMG I wish I could play football (tackling isn't too good for me). I love the game. I mean, how many girls do you know that keep a football at their work desk???? Way to be. What position do you play?

That sounds super exciting! Boxing is hardcore, and I can't wait to hear how awesome you are at it!

Lily -- boxing is hardcore -- but you can take it at your own pace! Would you ever try it?

Just wanted to stop by and say hi, I just recently started following your blog. I too am on a journey to losing weight and getting healthy and I have a blog. Looking for others going through the same journey for support.

w00t!!! Very nice! So glad you took this step. I'll definitely be keeping up to see how this boxing thing is going for you. I have often thought about doing it myself.

Nice job putting yourself out there!

Vinny -- I should be in bed now, but somehow I knew you'd be replying to me and I wanted to be here to reply back to you.

BY ALL MEANS -- GO AND PUNCH STUFF!!!!
I'll hopefully be posting again tomorrow regarding our second session (tomorrow at 7 am). If I can do it, so can you!

I've never heard of LA boxing before. I will look it up because you have got me interested. I am more in to rebounding and am attempting to lose weight through rebounding based exercises but I have always wanted to try kick boxing. I will check to see if they have any centers near me - you've got me thinking that boxing would be a fun addition to my weight loss regime - thanks!

RF -- it's SOOOO MUCH FUN.
It will also kick your ass in fun new ways :P

Boxing sounds like fun. I would be willing to try it, but diva moment.... can I keep my nails? I like them...
I am definitely going to follow your progress and journey on this one.

How long are your nails??