Home » Reviews » The Fit of Fitting In Part III: BOOBS!

The Fit of Fitting In Part III: BOOBS!

in Reviews - on 2:27:00 PM - No comments
The Fit of Fitting In, Part I:  All people deserve to feel comfortable when exercising, not just athletic models.
Give us options that make us feel fast and strong, not just like we need to be camouflaged.

The Fit of Fitting In, Part II:  Taking City Sports' extended sizes for a spin, or rather, for a cha cha cha.

Also related:  my thoughts on being "Lulu-Worthy" well before they were publicly criticized for shunning plus-sized shoppers.
So the title of this post says it all:  BOOBS.  Boobies. Tatas.  Breasts.

They've always been a part of my body that (1) I've been proud of, but (2) have been made to feel ashamed about.  My first bra was a sports bra that flattened my breasts into my chest, all because my mom was jealous of my development.  The old ladies at the store kept trying to show me cute things with little bows, but my mom would have none of it.

Because of my history with sports bras, I'm VERY particular about sports bras now.

I've been a big fan of Moving Comfort for a while now.  Instead of sizes being S, M, L, XL, Suspension Bridge, they mix up band and cup size (you know, like a regular bra).  I'm wearing the Moving Comfort Vixen bra in my "Joy of Exercise" and "Spokesbody" videos.  Recently, City Sports Bethesda (MD) had Moving Comfort in to do a sports bra fitting and they invited me to come in.  Their awesome rep, Christine M., measured me (a 38DD or its 'sister-size' 40C) and gave me a few options to try on.

So much of the bra fitting process is about finding what works for you personally, not what works for anyone else.  Try on a few bras, jump up and down, bend over, jog around.  Don't be afraid to test the bra! 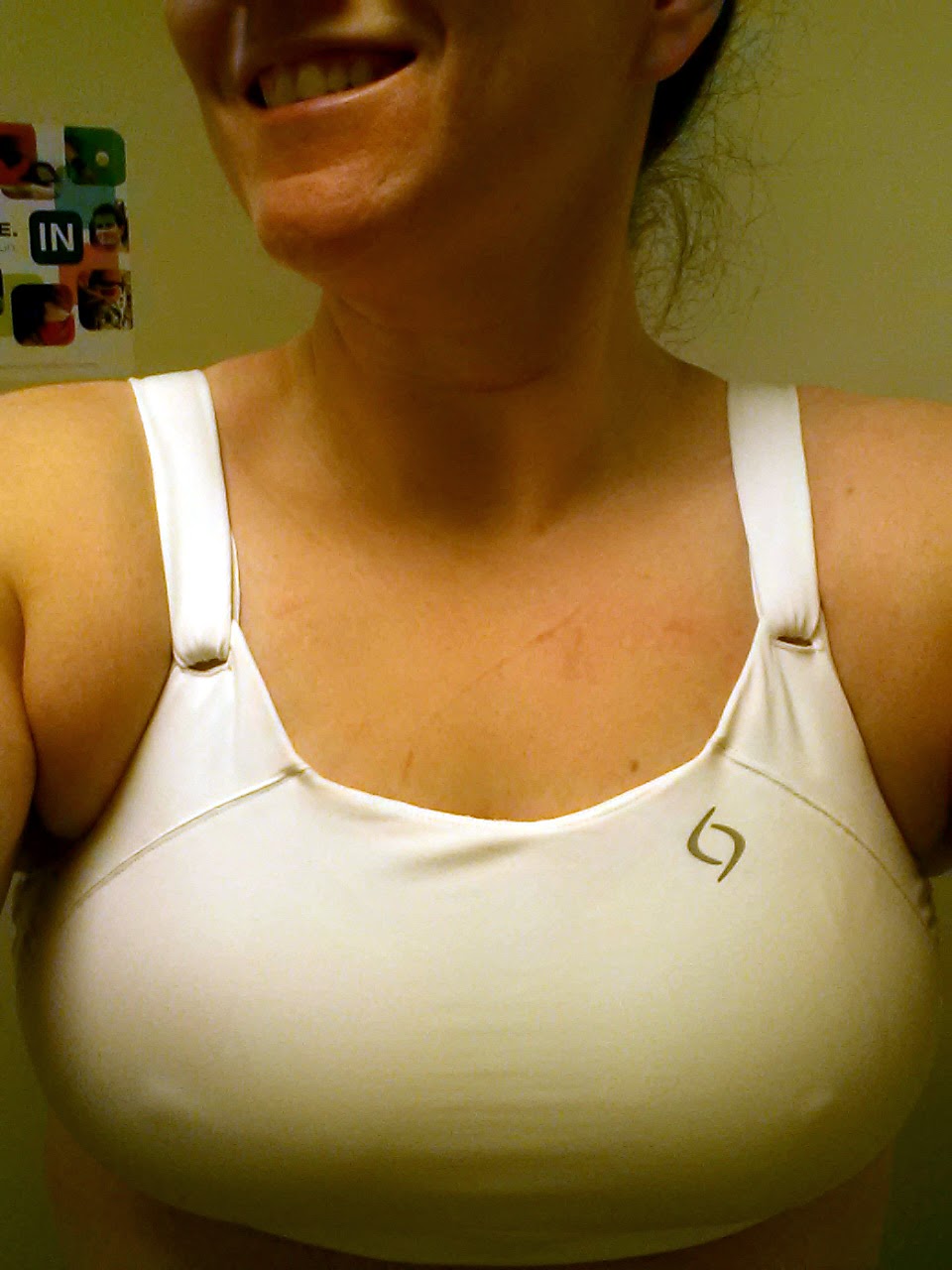 Jubralee
I wanted to like this bra but it didn't happen for me.  I felt it ran a little small (see the stretch across the front?).

Also, there was no underwire in this bra, which means it broke the uniboob rule.

I did, however, like the wide, adjustable straps. With some of my older VSX bras (before they redesigned the line), I'm always shortening the straps (from the back).  These shorten from the front, which is BRILLIANT. 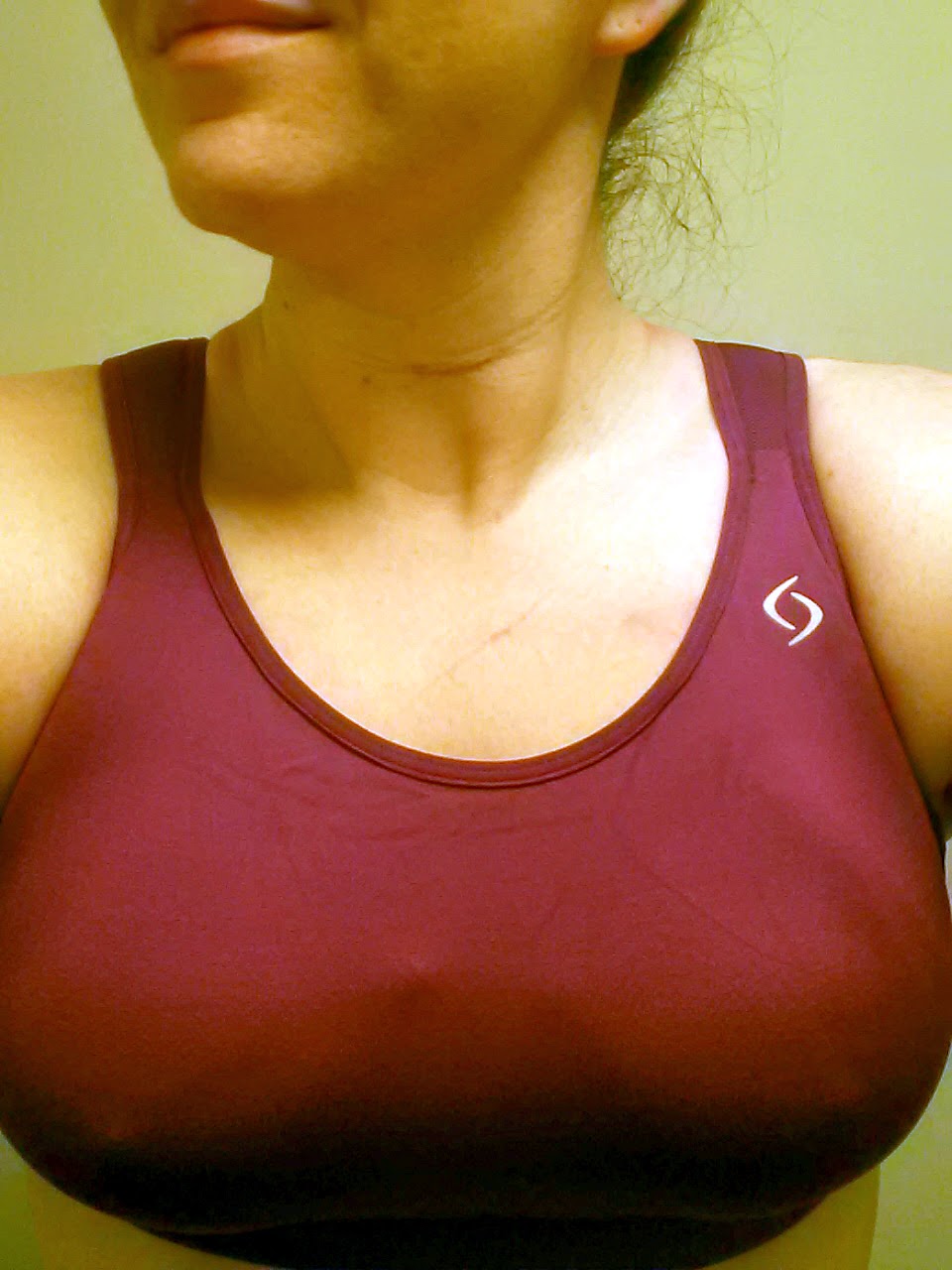 Maia
This one was all sorts of wrong for me.   I didn't like the relatively high neckline and how close it cut under my arms.  And while I appreciate that there is an underwire and support, the underwire poked out in a way that made it look like I had a roaming third nipple.

I did like that they had gel-padded straps.  I can see this being a very important feature for larger-chested runners. 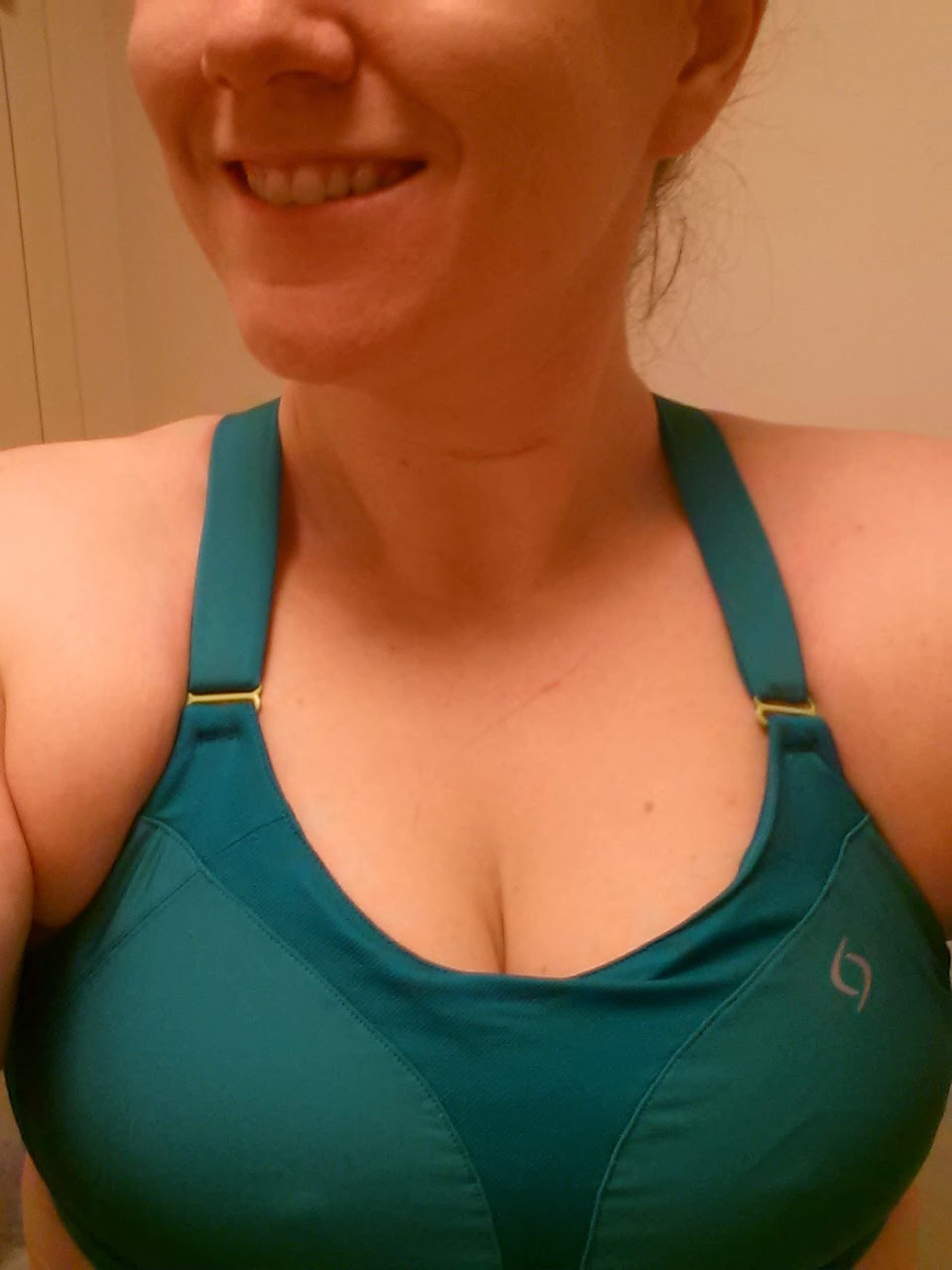 Endurance Racer
Maybe it was because the bra that I tried on was green, but my first comment to Christine M. was "HULK SMASH BOOBS."  It wants to pretend that it is a very supportive bra, but it compresses without supporting/encapsulating, and thus failed the jump test.
From the outside it looks like there are molded cups, but there are not.  And as you can see, the fabric was doing something funky. 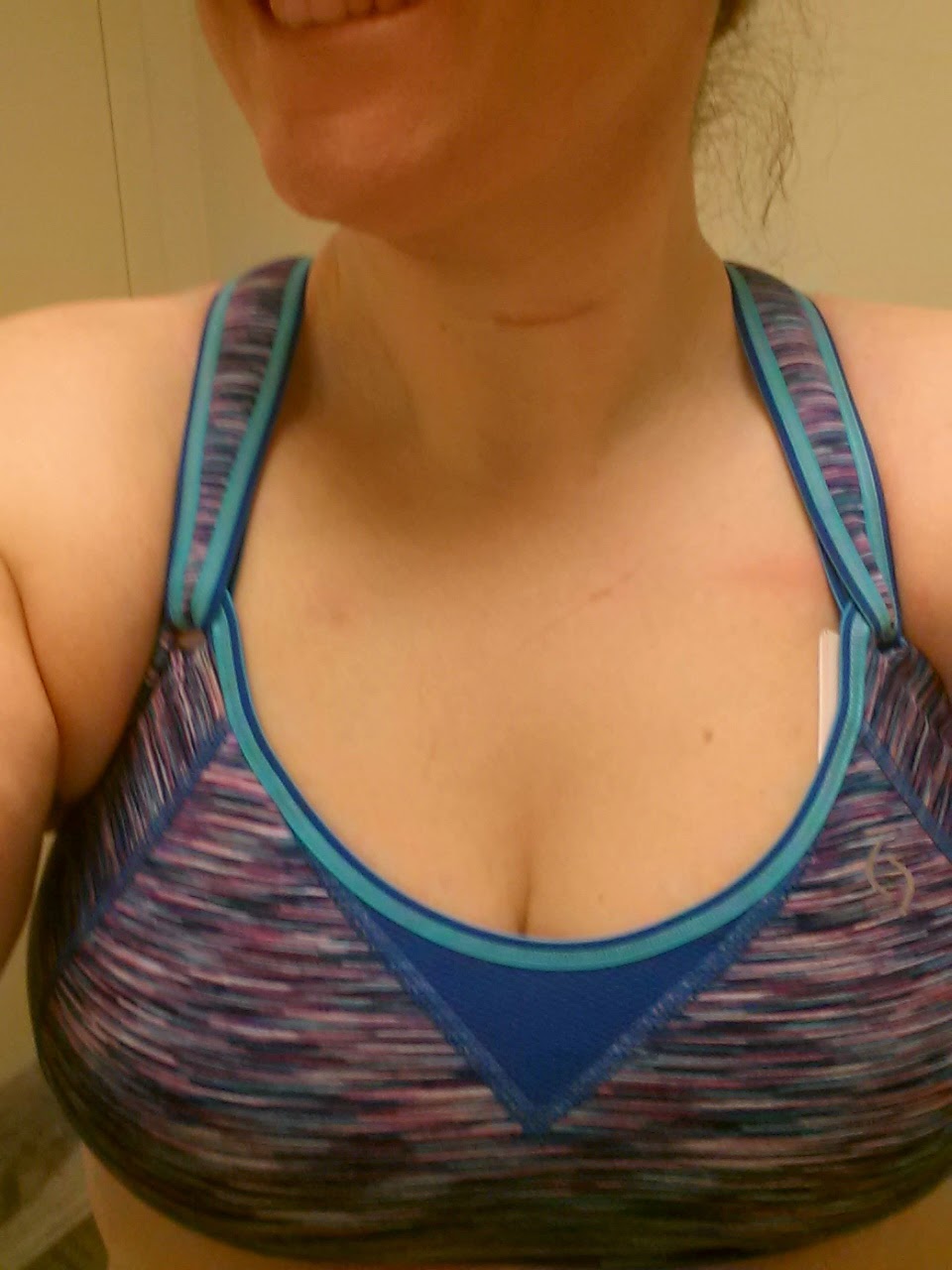 Rebound Racer
For all the reasons the other bras weren't quite doing it for me, the Rebound Racer ( the bra that I tried on first!) was a better choice.

The Rebound Racer had the wide, adjustable straps that I liked from the Jubralee.  While there was no underwire, there was plenty of support.  The pattern helped skirt the uniboob issue, but not completely.

I just did a 5-mile run on the elliptical and it did okay, not great.  I purchased it in the 38DD, but like many of the reviews on the site, I found the band to be a little tight.  I did find there was a bit more vertical jiggle than I would like. 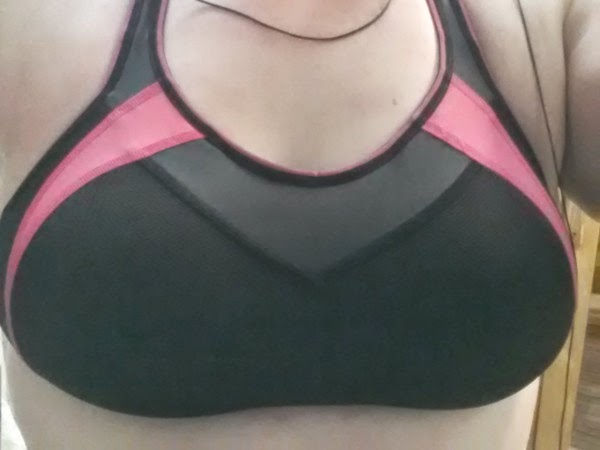 The Urban X-Over
I've been wearing this model of Moving Comfort Bra for 2 years and I love it for a lot of reasons.  The molded cups mean I'm not flashing my nipples to everyone in a cold gym (see Jubralee, Maia, Endurance Racer).  The molded cups also keep my boobs separate and secure.  I don't have a uniboob in this.  The racerback fully unhooks.  It's one of the easiest sports bras in my collection to get in/out of .  It is also the bra that stays the most dry (= less chafing).  And because it's an adjustable racerback, I can put my boobs where I want them, and they'll stay there.

So while I didn't find a new bra that blew my mind, I'll stick with the Moving Comfort bras on which I've come to rely (The Urban X-Over and the Vixen), as well as my surprising love for the Victoria's Secret Incredible sports bra (which I hadn't expected to love, but is a serious contender for a running bra).
Tweet
Labels: Reviews