Tools of the Trade: Chub Rub and Body Glide

in Boxing, Guest Post, Reviews - on 4:43:00 PM - 5 comments
I love Twitter because you can get into some of the most random and yet informative conversations with friends, aquaintences, strangers and companies.  That was the genesis of this post that we are now presenting as a jointly-written conversation.  Melissa/@StatofLimits and I were talking (with a few other tweeple) about the dreaded chub rub when Kenlie/@AllTheWeigh chimed in that she had tried to order/use, but had yet to receive, our salve-vation (tee hee gotta love a pun): 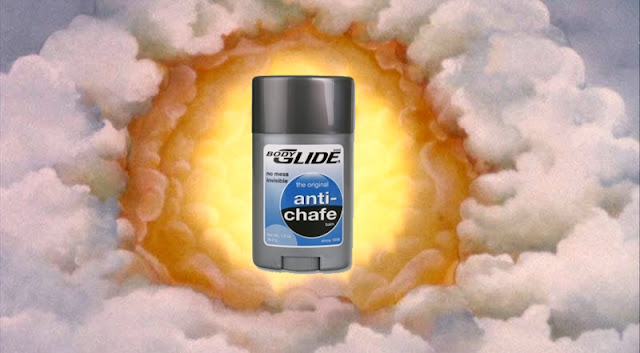 Robby: I don't know about you, Melissa, but BodyGlide changed my life. I know it sounds like hyperbole, but anyone familiar with chub rub needs to know about this stuff.

Melissa: I was a skeptic at first. How long could it possibly last? What kind of protection could it really offer? I'd resigned myself to living with the pain of chafing. Then the owner of a local running store saw me eyeing BodyGlide at the checkout counter and suggested I "just give it a try." I have never looked back. One time I forgot to put it on before an 18 mile run and couldn't sit comfortably for days. Three words: butt cheek chafing.

Robby: I wouldn't say I was a skeptic as much as I was just plain desperate. Not quite as desperate as butt cheek chafing (lol) but there were definitely chub rub rashes between my thighs and a few heat blisters under my sports bra. I had tried baby powder, Vaseline, lotion, you name it. But the BodyGlide won me over simply because it created a long-lasting barrier between my skin and whatever was irritating it. Since first using it I've put it pretty much everywhere on my body--thighs, underarms, under my boobs, on my hands (under my boxing wraps), and on my feet. I even used it once to tame my eyebrows.

Melissa: I use it on my heels and in between my toes. I just got this fantastic pair of cowboy boots, but they need to be broken in. In the meantime, they pinch in all the wrong places on my feet. Enter, BodyGlide! I haven't had a bad blister since I started using it. Also, my heels look much less disgusting (they're not cracking as badly after repeated applications).

Robby: Good call on your heels–my feet look so busted after an hour or two at the gym. I’ve used them for high heels and flip flops as well.

Melissa: I remember, a couple years back, going to an amusement park in the middle of the summer (in Texas). All of my girlfriends were getting dolled up in short shorts, skirts, and sundresses and I had a pair of jeans on. I just knew that if I didn't have fabric between my legs I was going to be dealing with extremely uncomfortable chafing by noon. I figured the discomfort of jeans on a 100° day was way preferable to raw thighs that would last for days, if not weeks. Now I just slide some Glide & wear skirts with pride!

Robby: I did the same thing when I was 17. I think it’s a lot better now because there are longer shorts/capri-length pants for the gym and summer. I hated being the fat girl on my softball team that had to wear spandex shorts under regular shorts because they rode up on me. Now I can wear soccer shorts with BodyGlide and no one is the wiser. BodyGlide has also solved my Irish/sensitive skin problem of skin that cracks in the dry, cold, windy weather.

Melissa: Irish love here! Got the red hair and freckles to prove it! Hm, maybe they could put some SPF in it!

Robby: They’re already ahead of you! They have BodyGlide with SPF 25! I haven’t tried that one though. My minimum SPF is a lead wall. But you bet I brought BodyGlide with me when I went on vacation (strappy sandals, shorts, skirts and sand were no match!). I have sticks of the original formula stashed everywhere. I've learned from my mistakes and bad judgment. I'd rather use it and be safe, than not use it and be sorry. You know, one time missing BodyGlide has a domino effect. Like if I get a blister on my hand from sweaty boxing wraps, I'm less likely to box the next day. If I get a rash from my thighs rubbing my next run will be agony.

Melissa: I'm the proud owner of, probably, half a dozen BodyGlide sticks. Some to keep in different places so it's always around if I need it, and then a "Can Share stick" and a "Do Not Share stick." There's always that moment where you get in the shower, post-exercise, and the second the water hits you, you know exactly where you missed with the BodyGlide. Like you said, if I've got chaffing discomfort, I'm probably going to convince myself I "deserve" to skip my next workout. But what’s most frustrating is being 10 miles into a run and having to stop because of the pain. BodyGlide made so many more forms of exercise accessible. I run in shorts now!

Robby: OUCH! You had to remind me of that painful burning feeling, didn’t you? And maybe you need to put BodyGlide in your run belt. I have lots of friends that swear by using powders or moisture wicking clothing, but those things don't always work on longer runs or when you’re sweating up a storm, do they?

Melissa: You're right. I do my best to combine different methods to prevent the pain and discomfort of chafing, like avoiding cotton as much as possible when I work out. A sports bra can be specifically designed with high intensity exercise in mind, but that won't necessarily stop it from moving against your skin while you run or bike, and that's where chafing becomes a problem. Chub Rub can happen anywhere you get that wet friction (and it doesn’t just happen to those with chub!). Anywhere I have elastic meeting skin, I throw on BodyGlide. Underwear lines, waistbands, bra bands. I've had some success with baby powder in those unfortunate situations where I missed a spot with my BodyGlide, though.

Robby: So it’s really all about finding what works for you, and sometimes mixing and matching different methods. I think the short of the long of it is that for under $10 a stick (for the 1.3 oz), it’s worth trying if you chafe, blister, or chub rub.
Tweet
Labels: Boxing, Guest Post, Reviews

I think you just gave me a solution for the chub rub pain of my mommy pooch-post pregnancy / c-section tummy issues! Thank you!

Becky -- Ooooh I hope it helps!

I am sold! I didn't even think about the thigh chaffing, that is my main problem, especially when I spin in shorts. I don't want to get those pant legs caught in the wheels!
Thanks for the amazing info ladies!

Christa -- I think you need to spin in capri-length leggings. Trust me.... they're fantastic. And they won't get caught. And no rubbing. But definitely try BodyGlide.

I love being irish.