Home » About Me » Ruminations » “The wound is the place where the Light enters you.” ― Rumi

“The wound is the place where the Light enters you.” ― Rumi

in About Me, Ruminations - on 3:02:00 PM - 2 comments
I saw this photo last week -- the unmistakable, unparalleled Marilyn Monroe and the scar from her gall bladder surgery -- and it struck a nerve when it came to how I feel about my own surgical scar.  She was simultaneously strong and alluring as well as vulnerable and human.

Prior to my artificial disc replacement surgery, I was worried that a scar would be an indicator of my being broken.  I made plans on how I would cover it up with scarves and distract people with jewelry.  I was surprised that after the surgery (1) it itched like crazy and (2) I felt very tender toward it -- that it was an indicator of my healing.  It wasn't the scar on me, it was my scar.

This past weekend, I had the pleasure of making the acquaintance of Alvin Mitchell of the blog People In This City.  Not only does he take photos but he likes to interact with the subject.  We talked about the skill of photography, and how Photoshop makes people unrecognizable from who they truly are -- that a good photographer reveals the subject, they do not disguise or hide the subject. 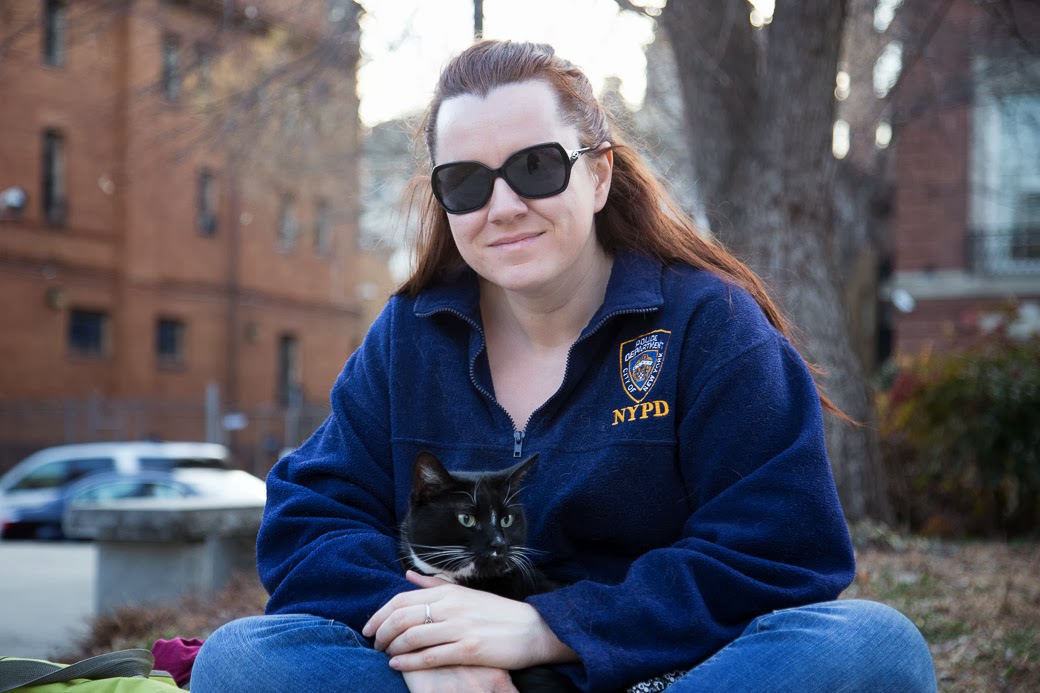 Jack cat was needing some extra stimulation and love after losing his brother, so I took out on his harness/leash for a walk and some time watching birds (this happens to be in a church yard).  I hadn't taken a shower, my hair was a bit of a mess, no makeup whatsoever, and I was covered in cat hair.  In other words, that was me on a weekend.

Alvin showed me the picture and I was very struck with the colors and the way Jack is looking out.  It wasn't until he published the photo on his blog that I noticed my scar.  I then read what he took from our conversation and realized how poignant it was to my very own story:  "People make assumptions about one another’s body… The scars and small details are a part of me.  Try to get to know the person -- that’s when the magic happens."

I have so many scars from all of my various hip operations all of my life. I remember being very upset at the huge Y shaped scar from my first hip replacement, I was only 35, the surgeon told me they would cut along an existing vertical scar. Imagine my surprise when I discovered the huge Y scar on my thigh & hip!

Then I realized how lucky I am to even be walking & I now view all of my hip & knee replacement scars as victories. There are many people in this world who cannot walk, I'm one of the lucky ones able to still be walking.