in Family, Interview, Ruminations - on 12:42:00 PM - 7 comments
In Part I of Discovering Dad, my very awesome and forthcoming dad talked about his childhood and the attitudes about health that he learned from his parents.  He candidly spoke about his own weight issues and how it affected his own view of himself.  Part II is a little bit more about my dad as head of the household and family man. 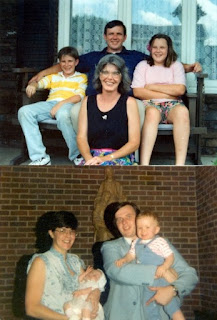 ﻿Q6: Mom also had food issues. What was your take on her eating habits? Do you think she had an eating disorder, or did she just have disordered eating?

A6: The latter -- disordered eating.   I don't know what she did when I was not there, but remember I saw her up in weight and down in weight, up, down, just like many who struggle, but no evidence of "disorder" that I am aware beyond that.   She did hide a lot of behaviors, so maybe you have a point but not a provable case, just supposition.  Since she's no longer here, you and I are in same boat as I about many things about your mother. What is clear is that we did not have healthy eating habits and did not teach you or your brother healthy eating habits and exercise and life style.

[From my brother -- I don't think she had a disorder with a standard clinical diagnosis.  I do no think she binged/purged, and she did not have anorexia nervosa (psych term) though she often had anorexia (medical term meaning aversion to/failure to eat).  Mom was teased as a kid for being overweight.  When her dad died (she was 16), it caused her to oscillate between under eating and over eating.  Mom got it under control until she went on meds for panic attacks (she gained weight), but then after she changed meds she got thin and stayed thin.  My memory as a kid is of her never eating breakfast, unless we went out for it for a special occasion.  I think she just ate dinner.  At the same time, she had the "finish all your food!" thing that people from the 50s have.  The portion sizes she served were reasonable.] 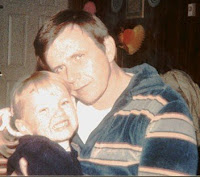 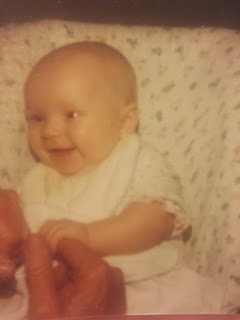 Q8: A little over a month ago, you said to me that as a baby I knew when I was no longer hungry and would stop eating, but that you and mom tried to get me to eat more. could you elaborate on this?

A8:  This was one of the same mistakes that was done to us on the presumption that one had to eat until full to be healthy, and that if we did not get you to finish your portions, that somehow we would be responsible for you not getting what you needed.

In retrospect, it was clear that you had had enough and you were a healthy baby, healthy tot and little girl. I can still see you in my mind, in your highchair at Starrett City and we were feeding you Gerber jarred food and you finished like just half of it and you wanted to get down and back to what you were doing (perhaps harassing your brother?).

We were aghast, we thought we were doing something wrong. We could not just let you eat half of your peas and meat, whatever it was. To be good parents, we had to get you to eat ALL you food. The same crappy myth we had been stuffed with, we perpetrated upon you. 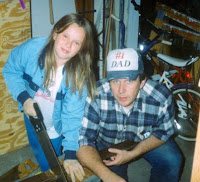 Q9: How did you try to educate me about diet and exercise as a child and teenager?

A9:  When did I ever educate you about health or food (other than making mountains of pancakes, slabs of meat, potatoes, dessert)?!?  When you got heavier, as I was heavier, I failed to see and get us running or exercising, or going together to the gym or anything positive. I recognize that I was a poor role model and I wonder if my depression rubbed off onto you.

Q9.1: I remember you once signed us up for Gold’s Gym, perhaps when I was 16. Why did we stop going?

A9.1:  Knowing me I probably came up with a hundred excuses.  When we signed up for the family membership, that came with one "free" training session -- I got a artificially-muscled steroidal freak who started me off on weights that were far too heavy.  He didn't address the needs and limitations of my own body.  Schedule was also a big excuse too.  I commuted over two hours each way for work, and I would come home at the end of the day tired.  Changing out of my suit into gym clothing was just too much to ask some days. 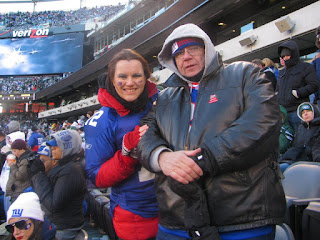 Q10: Now that we're both adults trying to get our weight in check, do you think it's important that we are good role models and inspirations for each other as well as the rest of our family?

Q11: I've tried to keep this interview brief, but is there anything else you'd like to talk about?

My life has been one with a lot of pain and sorrow and loss, and my childhood was not a happy one. Many issues continued into adulthood, and new issues arose. Clearly, I have had an unhealthy relation to food and and other consumables which were bad for me. Couple that with smoking and I have not taken care of myself.  Some people have an innate sense of themselves and take pride and thus make the effort in their health and their appearance. In the course my life, I can not be so categorized thus far. But I want this to be otherwise henceforth.

You are so much younger than I, and have, I would say, a much better grasp of who you are and what you are about. You have made tremendous progress and you have an iron will. Now that you are on the mend you are able to get back on track, but more importantly, you can see the path and have a clear grasp of how you want to follow it. What I mean is, you have have seen the issues, and rather than just floundering through it all, being buffeted by the storms, you have put you keel down, you have a firm hand on the rudder and you know your course. This is not saying that life does not have its difficulties or problems nor insecurities, setbacks or doubts and pain, but you ARE taking care of yourself, saying: “ the healthier I am, the better I can handle all the other stuff.”  I am proud of you and love you very much.

wow. I love your dad. what an insightful conversation and how awesome to have him in your life, being so open and honest. xxxx

Renee -- I feel bad sometimes that he's the only one around to answer these questions that I have about my childhood, but at the same time I'm so proud of him for stepping up to the plate.

Awesome interview! Thanks for sharing! Your dad is super cool!

I love love love this...and I'm missing my Dad and thinking about how cool it would have been to interview him on my blog. Thank you and your Dad for being so open honest, not just with us, but with each other.

I love that you interviewed your dad. Your relationship with him is extremely heartwarming :)

Just found your blog and I love it!

This was so interesting!
I have anorexia/bulimia and can trace my problems back to when I was a child
Addiction is rife in my family and 2 of my aunts also had eating disorders
I think it's definitely genetic as well as environment and just plain bad luck

KCLA -- I often feel bad that my Dad is the only one still around to answer many of the questions I had about mom. But asking questions has helped us understand the past and each other -- and how to get out of these bad feedback loops.

Safire -- welcome to my blog -- glad you enjoyed the interview!

Ruby -- I'm so sorry to hear about your anorexia/bulimia. It's such a crappy disorder. I hope you're seeking treatment and see the light at the end of the tunnel. I definitely think that addiction and OCD behavior are genetic, but that there's a strong environmental component that plays in to expressing those traits. It sucks that their neurosis fed into your disorder. Best of luck to you!!