Home » Reviews » Didn't get that memo

Didn't get that memo

in Reviews - on 5:46:00 PM - 5 comments
So...doot da do... Grimmway Farms was AWESOME and sent me some swag as a prize for participating in their #JustCrunchEm chat (emceed by Courney Crozier (BL11) during the Biggest Loser a few weeks ago.
They sent me The Biggest Loser Family Cookbook (2008) signed by Sione Fa (BL7), Felipe Fa (BL7), and Mark *mumbles through his last name* Pinhasovich (BL10) (who are all so very handsome and dreamy).  They also sent me a fancy Just Crunch Em tumbler (that I've already used for my mean green smoothie): 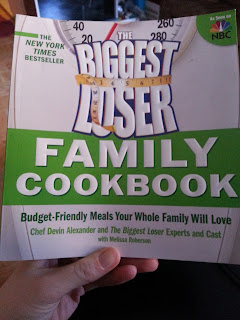 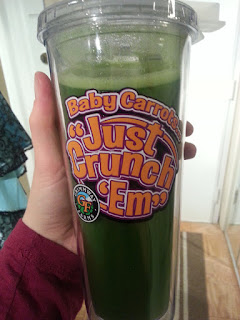 I'm really appreciative towards the gang at Grimmway farms and former BL contestants involved in the giveaway.  However.... I take issue with a few of the things said in the cookbook:

Why am I not impressed with this?  There are many foods that we eat that are harmful to a pet's digestive system.  And more than that, you should also be mindful of your pet's diet and nutritional needs.  It's just as hard for a pet to lose weight as it is for you to lose weight.

But even worse than that was this little nugget: 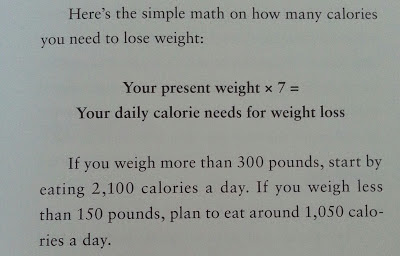 First of all, the math is not simple.  This is why I strongly suggest getting a BodyMedia Armband (click here to get 15% off), so you can measure your caloric expenditure rather than just estimating it.   This is the only guideline the book offers in terms of calculating caloric intake.  It says nothing about caloric expenditure/multiplier factors (such as the Harris-Benedict Equation) for people that have active lifestyles or workout.

Secondly, I'm a voracious reader of all things diet and nutrition related, and most dietitians and doctors agree that people should never go under certain caloric thresholds.  It varies among experts, but it's usually between 1200 and 1400 calories.  This is for two reasons:  (1) it's difficult to get all the nutrients one needs for anything less than 1200 calories (2) the average person's needs around 1200 calories just to stay alive (basal metabolic rate). Eventually, such a low caloric intake will have negative consequences for a person's metabolism.

I'm really disappointed that The Biggest Loser put out a book like this.  I just hope that in the 5 years since the publication of the book that they have addressed and corrected this bad advice.

Do you know your daily caloric intake requirements?
Do you food log?
Have you had your food logs analyzed by a registered dietitian?

Are you just kinda winging it?
How do you know that your plan is healthy and achievable?
Tweet
Labels: Reviews

The "Biggest Loser" brand seems to be putting out more and more poor information and I am trying to distance my self from it at much as possible. Anytime I see their information it just seems like a shaming mentality and I feel that is not the way weight loss needs to occur. Forgiveness and mindfulness, not shame.
On the topic of food logging I do log my food on MyFitnessPal and I've spoken with a dietitian. I feel they are an invaluable resource to finding patterns in eating, creating a plan that is right for you and also some people have alternative nutritional needs that a nutritionist can help you plan for.

That being said -- I started at the beginning with Dr. Huizenga's book, which seems to be the most medically sound. The further one gets from that book, the more it's just "DO THIS CAUSE I SAID SO" and less "well, this study resulted in this theory..."

And I think that the more vulnerable you are to the shaming, the more open you are to someone pushing you around versus trying to teach you.

I'm glad that you're food logging and that you have worked with a dietitian. It was one of the most eye-opening experiences in this whole journey for me.

I'm so glad you brought this to attention! While I personally own the Biggest Loser Family Cookbook, and love a lot of the recipes, I believe that The Biggest Loser as a show and as a brand put completely unhealthy expectations in people's heads when it comes to weight loss and what constitutes healthy eating and proper calorie intake. I will admit I'm watching the show this season for the first time ever, and while it is excellent reality television, it is a poor, poor example of what one should expect when committing to the weight loss/get healthy journey.

I am forever trying to educate myself on proper calorie intake. I log food daily, as well as wear a FitBit to track steps and estimated calorie burn each day. I have found the FitBit to be extremely helpful in realizing what my actually daily activity level is. Unfortunately, I don't currently have the funds for a BodyMedia YET... but it is one of the many fitness toys I am saving towards. :)

"it is a poor, poor example of what one should expect when committing to the weight loss/get healthy journey." Couldn't have said it better myself.
Biggest Loser sets it's contestants up for failure, hands down. Didn't realize their calorie intake was THAT low, but no wonder 95% of them gain their weight back in a heartbeat. I wish wish wish people would realize that the entire show is just that--a show--not a way to live your life. While it makes for entertaining TV, it does more harm than good. People are afraid that ALL trainers are going to yell, scream, humiliate and shame them. They think it's normal to pass out during work outs. Worst of all they learn that they are terrible people for losing "only 2lbs."
Slow and steady, people--otherwise you're learning the wrong habits.

Jess: Like Emily, I think you couldn't have said it better myself. Their disclaimers need to be at the bottom of every scene, not just at the end of the program. I was more disturbed that some realllly bad advice made it into a book with their brand on it, but written by an acutal dietitan.

There are parts about the show that I love: I love seeing Dr. Huizenga interact with the contestants and show them (1) the effect of the added weight on their body, and (2) the improvements they are making to their body and health by making these changes.

I like watching the contestants have their epiphanies -- when they break free of their past feedback loops and get out of their own way.

I highly recommend the BodyMedia Armband -- and just FYI -- my company has a "wellness reimbursement" program. We can purchase $200 of health related gear a year and it gets reimbursed through our payroll company. My armband was 100% paid for :)

Emily: One thing that i see contestants struggle with is the "but I did everything right, and only lost 2lbs" mentality. I always try to be more focused on the behaviors than the results. Can I be proud of the effort I put forth?

And you're right -- the CDC says that people that lose weight 1-2lbs a week are more likely to keep it off. I'd love to see a comprehensive study/follow up on all Biggest Loser contestants -- to see how many gained it back.