in About Me, Boxing, Reviews - on 11:37:00 AM - 2 comments
Anyone who has read my blog for a while knows that I don't do many product reviews or giveaways.  If you see me talking about a product, it's because it's something I'm already familiar with and love anyways (see my About Me page for a list of some of the things I use/love).  To be fair, there are companies that have given me discounts/samples AFTER I have mentioned their product in my blog (but it was of their own volition).

I rarely devote a whole post to one product, but I will mention it in passing.  Why? I don't like being beholden to a company--I like the freedom to write what I want.

Which brings me to this:

I had the Minimus shoes since a little before #Fitbloggin, and they had only been used in inside while boxing or running on the elliptical.  My version were the trail running shoes.  I was just real sad b/c I had grown to love them at boxing, but the treads would fold under themselves and sometimes trip me up (I don't think they were a part in me breaking/spraining a toe).
Very soon after, I saw this (from Katie, the New Balance Twitter Rep): 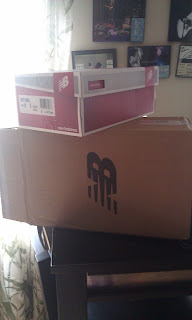 I called right away and spoke with Amin, who was AWESOME.  We chatted about the usage and history of the shoes.  I thought they were asking about the usage and then were going to pass the info along to their labs then say "well, they're out of warranty..." BUT Amin surprised the heck out of me and told me they'd replace the shoes.   That bowled me over!  On top of that Amin was even willing to send me a different version of the Minimus shoe that might be better in a gym environment (I declined, since I really love the ones i have).  And the icing on the cake was that Amin understood how much I loved the shoes and how I hated to be without them, so he was going to send them to me without waiting to get my return first.
Lo! and Behold! I received this box yesterday in the mail.  I only missed two workouts in my Minimus shoes (one sparring class and one 7-mile elliptical run).   Believe me, they were sorely missed.  While I like my other sneakers, my whole body loves the Minimus shoe.
So I'm really starting to love New Balance as not only a great supporter of their customers in general, not only as an involved participant in the social media community, not only as being extremely generous at #Fitbloggin (sneakers, capris, and headphones! oh my!!) but a brand that treated me not just as a number, but as a valued customer that they want to keep.
So, shout outs to Katie and Amin -- I dedicate today's run to you both.  I'm hoping for 10 miles on the elliptical in my new shoes.
In semi-related news, I haven't gushed about my other new favorite product.


A little back story:  I'm pale (Irish) with dark hair (Irish/German).  I have really sensitive skin (Irish).  I sometimes shower twice a day.  It dries me out no matter how much lotion I use (Aveeno or Nivea).   And the worst part is that my leg hair grows quite fast.  In the past. not shaving my legs has actually prevented me from going to the gym.  Eventually, I realized that if people were judging me b/c of some leg hair, it means they weren't focusing on their workout.
Now I'm trying to grow the leg hair out so I can start waxing it.  But there's that awkward in-between Yeti stage.
Enter the New Balance Base Layer Legging: 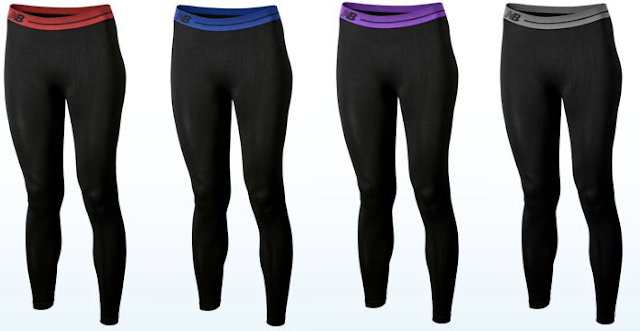 I have three pairs (two red, one blue) and think they are PERFECT.  I initially bought them (through Zappos) as a base later for my xmas eve football game in NYC, but they're opaque enough to wear with a tunic-length shirt to the gym (ladies, I still don't think leggings are pants... but if you cover your butt/lady bits, we can talk).  I wear them under shorts and even once wear them under a dress with boots. They're comfortable, soft, don't require ridiculous special care, and they keep their shape very well.  I highly recommend them to everyone.
Tweet
Labels: About Me, Boxing, Reviews

Thanks for posting about the minimus shoe. I have been wearing their running shoes for the past two years, but wanted to get a flatter shoe for crossfit that I can lift and still run it.

Oh my lady balls. I love them. It takes a few tries to become accustomed to a minimal shoe, but once you do they're awesome. I especially love that it puts me in the correct position for squats, lunges, and helps me feel the floor when boxing.

Fat Girl vs. World
I'm 37 and have been overweight or obese since I was 8 years old. This is my journey to change not only my body but my relationship with it. And who knows, I might even meet some people on their own journeys along the way. To contact me privately, email me at FatGirlvsWorld@gmail.com