in Advice - on 7:20:00 PM - 6 comments
Part of the #DecGTD challenge is tracking water consumption. Water consumption is important to me -- mainly because of all the other crap that people drink (water, soda, diet soda, juices, etc.).  I'm a firm believer that pure, unadulterated WATER is the only "DIET" drink you need (in other words, it compliments a well-balanced diet).

HOWEVER.... I found myself wrapped up in a little bit of a Twitter mini competition as to who could drink the most.  For the most part I'd encourage this type of playfulness.... except for a very sad occasion in my life: 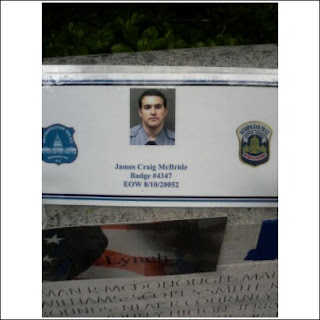 A highly honored 25-year-old D.C. police officer died yesterday after he apparently drank too much water Tuesday while training to use a bicycle on patrol, police officials said.

Doctors believe that hyponatremia, a sodium imbalance caused by drinking excessive amounts of fluid, most likely caused or contributed to the death of Officer James C. McBride, police officials said. McBride consumed as much as three gallons of water during and after the 12-mile training ride Tuesday morning, police said.

I know no one has approached the 384 ounces that Jim is rumored to have drank. I know not everyone is doing a rigorous biking course in the middle of the summer.  But I do know there's a fine line between being okay and overdoing it.

He had a 3-liter Camelback pack.  The day he told me about it, I warned him to cut his water with Gatorade or Pedialyte -- passing on the advice that two former boyfriends (and long-distance cyclists) had shared with me.  They told me it was important -- because if they only drank water and didn't replace the salts in their body their body could shut down.

Jim ignored my advice.  To this day I regret that I didn't make him hear me and heed me.  Because of this the world is less one of its champions and I lost one of the best friends I've ever had the privilege of knowing.

His last blog post (on what was my 24th birthday):


So today was my first of five days in mountain bike school.

And it was a damn lot of fun.

The first thing we did was the usual administrative nonsense (sign this, write that, read this, agree to A B and C etc.), then we learned how to work and do basic maintenance on our Smith and Wesson bikes. Then we went riding. We tackled small hills (and at the beginning, before I figured out how the gears work, I couldn't do even small hills), then long rides, then hills again. Hills suck, but the long rides were fun. I believe I drank over 7 liters of water all told... and I was still wanting for more towards the last half of the ride (Monica you thought the 3 liter camelback was to big!)

After my initial gear working issues I def kept pace with the group. They tell you when you start the class that its all mental... and it is. I refuse to fail, and so far I've been doing well. Will power and gel pads. I'm not sure when gel pads became the rage, but I found shorts with gel pads and gloves with gel pads, both of which def helped with my overall post-class comfort. 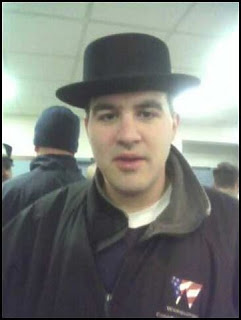 The question of "How much" is a bit tricky, and highly dependent on environmental and personal factors.  Most people at the gym do not need to consume an excessive amount of water while working out.  Heck, most people don't even need Gatorade at the gym. But I don't want to say anything here that will make someone go the other direction and get dehydrated.  But 3 gallons in a few hours is definitely waaay too much.
Tweet
Labels: Advice

Wow, I didn't know you knew McBride. He's the reason why I joined the department in the first place (he wrote a referral for me), and why I finally decided to become a police mountain bike officer as well.

I also remember reading his last post, and the shock of hearing his illness (and subsequent passing) while I was still in the academy. I was so angry at the academy staff for letting him getting so sick. There was some other stuff going on that day during the training that the situation was completely mishandled (imo, of course).

Anyway, it gives me comfort to know that he died doing what he *loved*.

I ride every day remembering him.

So glad to hear someone else remembers him too.

Wow. So sad to have a young life cut short for any reason. I'm so sad for the loss of your friend. It's wonderful to continue to honor his memory.

KC: It's a small world, eh? He actually found me through livejournal. One day in the middle of summer (2002? 2003?) I was complaining about seeing this dog locked in a car without any windows cracked. An hour and a half went by before its owner came out. This was when he was working at DHS and he commented "next time call this number and ask for Jim. He'll help you." This is how we became friends.

But I will tell you this -- one day i made dinner for him. I think he read it as a date and he tried to trade my lasagna for a kiss. In retrospect, I think I missed out on one of the great adventures of my life. To this day I regret not letting him kiss me.

I learned about his passing after his memorial service (I'm so bad at reading/watching the news). I was utterly distraught. My brother took me to petsmart to help console me with kittens and I ended taking one home and naming it Dante (b/c everyone said Jim looked like Dante from clerks).

It's amazing how one person had the ability to touch so many people.

KC, I know it's silly, but I thank all bike cops for what they do. A few ask me why and I mention him. I'm glad they know him and his story. If you ever need anything, please reach out to me.

Carrie -- I try to honor his memory. I visit his name on the National Law Enforcement Memorial every year on the anniversary of his death. It's touching to see that there's always a wreath for him.

Wow, I am so sorry to hear about your friend and I had no idea that drinking water could be so dangerous in the extreme.

Thank you for sharing.

I'm so sorry for the loss of your friend.

I'm so glad that you posted this. This has been on my mind recently with all the water guzzling going on...

Just found your blog, will be reading!

FatAngryBlog -- I think anything can be dangerous in the extreme -- think about starvation/cleanse diets. Those too throw off your body chemistry.

Beth -- believe you me... if I saw anyone approaching something dangerous I'd give them the talking to of their life.