I lied to my trainer.

Two people do their pullups

Randolph: (to Robby) Your turn.
Robby:  *shakes head*
Randolph:  Why are you afraid of?
Robby:  *points to back* I don't think I can.
Randolph:  I did mine (he hurt his back last week)
Robby:  I'm afraid it'll strain my back.

Another person does their pull-ups.

Robby:  Okay. I'm in.
Randolph: Just bend your legs (he was going to do an assisted pull-up)
Robby:  *tries to strong arm her way through it and fails, gives up after one try*
Randolph: You got to bend your knees.
Robby: I can't. I'm just not strong enough.

Another person does their pull-ups.

Randolph:  You've got this.  Just bend your knees and I'll help you.
Robby:  *mumblegrumblegruntbreathes* *knocks out 10 assisted pull-ups*
Randolph:  *that knowing look that Randolph does when he once again proves he knows more than you do*

I thought about my favorite lyrics 5 minutes later -- "There's a moment when fear and dreams must collide."  You must choose which means more to you -- holding on to fears that weigh you down, or hanging on to dreams that propel you to greatness.  That's the fight we're all fighting in one way or another, no?

In that moment, what did these lyrics reveal to me?

The lie:  I wasn't afraid of my back getting hurt.  My back was fine.  And if it hurt my back, at least I would go down swinging.

The fear:  Traced all the way back to elementary school and the Presidential Physical Fitness Test's pullups/flex-arm hang;  If there was one thing I was worse at than running the mile, it was trying to do pull-ups of the flex arm hang.  ((Raise your hand if you were also that kid would would rather get pelted in dodgeball than do anything that required upper body strength.))

The fear:  If I can't support my own body weight, how can anyone else support me?  I might've lost the weight, but there are still times my brain acts like I'm 240lbs. 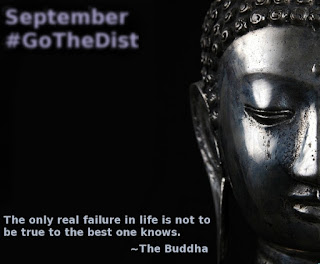 The truth:  When I don't think I can, it's okay to trust someone telling me that I can, to let them believe in me more than I believe in myself.

The truth:  It's okay to trust that someone will catch me if I fall, especially when they've earned your respect in so many other ways.

The truth:  People can provide the extra support I need to achieve a goal. It's not a sign of weakness, it's a sign of trust.

The truth: Try first before my brain decides what my body can or cannot do.

The truth:  Not a single person there wanted to see me fail.

The truth:  "Someone I am is waiting for courage.  The one I want, the one I will become will catch me."
Tweet
Labels: About Me, Mental

Good attitude. You got this thing! The only time you can be courageous is when you're afraid.

I think that most problems in anyone's journey is that mental barrier. I know it's been MY biggest problem, and overcoming it is hard, but totally worth it in the end.

I also I hope that YOU had a grin on your face once you'd finished your pull-ups. :) Makes you wonder what else you can do, that you think you can't, right?

Chad: I think if you're unafraid you're either full of shit or complacent. Anyone who digs deep, pushes their limits, or faces the unknown is scared shitless.

Tracy: The mental barrier is a hard one. There are things I know I shouldn't do from experience. Running on hard ground hurts me. But I was using my back as a scapegoat for not even trying.

Though, I must say I really like something from one of the links I posted (Motley Health) "It can take months to develop the strength required to do a pull up, and if you are overweight then this will make things much harder..."

Yes. I know what you mean. It wasn't the upper body strength for me, I was really good at that, but the running.

I think a lot about food and emotional issues, but I should probably put some brainpower toward my feelings on physical activity. That's what I struggle most with now--I'm not consistent at all.

G -- I'm not sure if it was that i lacked upper body strength or that I just weighed too much as a kid. Either way i couldn't do it. And likewise, I know you've always got my back.

Tasty -- The Presidential Fitness Test has changed -- did you check the link? Kids aren't held to the same standards anymore. I think sometimes it's good to turn off our brain and let our bodies work things out in their own time.