in About Me, Dating - on 12:27:00 PM - 4 comments
Two Fridays ago, my neighbor called and said he had spare tickets to the Keegan Theatre's performance of Dogfight -- the musical version of the movie by the same name.  The basic plot is that on their last night in the U.S. (San Francisco) before going to Vietnam, 4 Marines decide to have a dogfight:  the guys all put money in a pot to have a party and the guy who brings the ugliest date (unbeknownst to the girl) wins the pot.


I was never a thin girl with cool clothing or a perky personality that put me in the middle of every clique.  I was trying to rock that whole fat and awkward look as best as I could.  Back then, I was also quite gullible/naive, wanting to always see the goodness in people.

So when I was in 6th grade at my first dance, and an 8th grader asked me to dance, it never dawned on me that I was a walking punchline.  I had kind of known him from my brother's baseball team, and I guess I must have thought that he recognized me too and wanted to be nice to me.  He pulled me in the middle of the dance floor and as I started dancing, I could see from the corner of my eye his friends huddled together, laughing.

Dogfight kinda brought up all these feelings -- of inadequacy, of being an outsider, and learning to be distrustful of men and their intentions.  After my mom died (8th grade), many of the "popular" boys started being nicer to me (I'm not sure why but I think one of the boys' moms had something to do with it).  I was thankful, but still not trusting.  I was shocked, but not trusting, when in 9th grade gym, one of the most popular kids in the whole school (the older brother on the boy I had a crush on for most of my life) wanted to be my gym mixed-doubles tennis partner.  I was shocked, but thankful, when my crush came to my Sweet 16.

So I realized that this whole jaded, distrusting thing that started in middle school lingers still.
For example -- 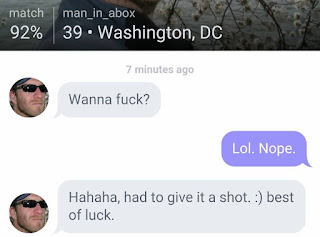 I posted this (and many other online dating first message disasters — #wtfokcupid) to my personal FB and a dear friend said "At least he finds you attractive. That's a type of compliment." And not only did I disagree, but I felt my stomach tangle into a knot.  In my world wanting to fuck me doesn't qualify as a compliment.

I'm sure that many of my female overweight friends know what it's like to have a guy just come out and say that they're "throwing [you] a bone" or that it's only pity sex, (i.e., they think fat girls are easy targets that will take whatever they can get).  The sad thing is that some girl will say yes to this guy, or guys like him, not because she's interested in casual sex (no slut shaming here!), but because she thinks that it's a compliment and/or that it's all she deserves.

I may still be a fat, awkward girl but through all of the taunting and teasing, the jabs and arrows, I have still managed to learn to believe that I deserve to dance (because the world is full of music) and that I deserve to be loved (because I am worthy and lovable for more than just a night).  But despite that I'm still wary of guys and their intentions.

One of the few guys in HS that I actually came to trust and adore said that one day I'd make everyone wish they were nicer to me.  I always thought it was because I would change.  I think I'm realizing now that he didn't mean that I would change -- it's that all the mean people would realize that underneath the fat, I was an actual person.

[Edit -- a friend from HS helped me to remember that not all guys in HS were assholes -- so shout out to ND who saw me walking home from school one day in the middle of winter and offered me a ride home.  Thanks to JH for picking up the phone the day I needed him.  And thanks for JE/PE for making the first xmas without my mom that much more bearable.]
Tweet
Labels: About Me, Dating

Thanks for sharing this. The hardest things to write are always the most meaningful.

You, my friend, are a bright, beautiful light in a cruel, dark world. I'm so thankful to have had you as a friend and neighbor. Keep on shining. :)

@ThaiPhi (very known... very appreciated) -- Thank you so much for your comment and more importantly reading all of the BS I wrote before I found my voice :)

@Lexi -- thank you. Always trying to keep the lights on -- for myself and for all the women I love who are battle-weary.

You deserve the fairy tale where you reign supreme.