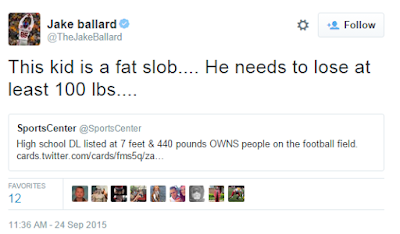 Let's break this tweet down a little:  a former NFL Tight end (Giants, Patriots, Cardinals) that retired after 3 seasons due to injury (i.e., a GROWN ASS MAN) is calling a HIGH SCHOOL TEENAGER (17) (John Krahn -- who is fairly new to football and knows he could compete better at a lighter weight and is addressing that already) a FAT SLOB.

Of course I took Jake Ballard to task over this. I mean that other chick at least recognized how her video wasn't intended for minors and how her words could be detrimental to vulnerable kids.  Here's a selection of the interactions with JB (versus his followers who don't realize how fat shaming doesn't actually work): 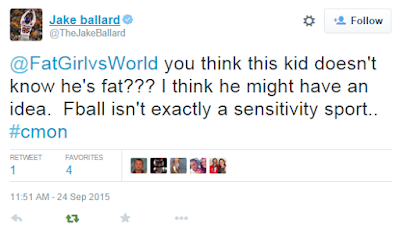 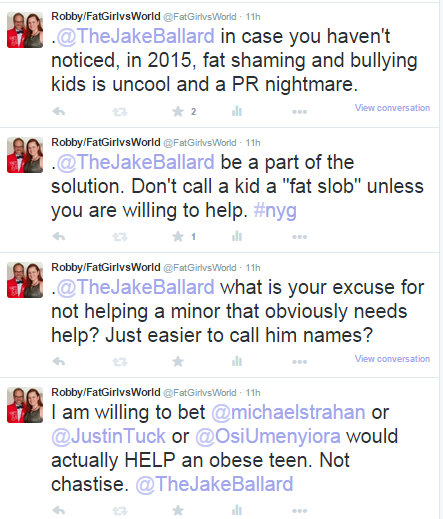 Funny thing is that the whole time this was happening, I was sitting in a bar next to two NY Giants fans:  an elementary school gym teacher (from NY) and a 6th grade teacher (from MD).  They told me about this thing that is all the rage with school teachers apparently -- PBIS (Positive Behavioral Interventions & Supports) -- that helps change the environment that kids are in by giving them the tools and encouragement to respect themselves and others while applying themselves to their responsibilities and goals.  You know -- the antithesis of bullying.
We KNOW (i.e., more than just theories and opinions) that fat shaming kids doesn't work.  We KNOW that celebrities/athletes (even former ones) (1) have large audiences (2) have a lot of influence (that is to say, they can use their words and actions to actually affect positive change).  And we KNOW that an adult fat shaming a minor isn't some act of benevolence -- it's ignorant and harmful.

It really bothered me when he used the hashtag "#everyoneisavictim" -- dude did not back down at all from his stance that calling a teenager a "fat slob" is okay to do.  It showed (1) no compassion and (2) arrogance that his unsolicited evaluation of a teenager was somehow not hurtful to the kid or even other people reading his tweets. Kids who are bullied are victims.

BUT in the end, I actually did try to follow his suggestion.  I think I found John on Twitter and said "hi :) I would love to chat with you some time about health, fitness, and being a positive role model." (He followed my account shortly thereafter.)

So this post is a 2-part call to action:
1.  Tell Jake Ballard how fat shaming doesn't work (tell him your story, send him studies, send him links of football players actually helping kids be fit (NFL Play60), etc.)

2.  Do what you can to help end fat shaming in your communities and/or help share what you've learned about nutrition/exercise with someone receptive to making a positive change in their life.

Thanks for pointing out the unnecessary cruelty and nastiness of a public figure using his position to mock a teenager. Just inexcusable for an adult to act in that way.

This toolbag chaps my ....hindquarters. I love that Sports Center says this kid OWNS people on the field. Maybe he'll "own" Jake Ballard one day.