Home » Dating » The date that wasn't

The date that wasn't

in Dating - on 10:09:00 AM - 8 comments
He was cute. He was a cyclist. His OkCupid profile stated that he was interested in mindfulness.  His emails were thoughtful and had correct punctuation.

Within 2 emails he suggested that he'd like to meet me.  I replied that I'm not smooth and would probably giggle a lot (I do that out of nervousness on dates sometimes).  He replied "I'm actually quite funny, so it's very likely you will not be able to stop giggling until the end and good bye kiss. What is your availability?"  Okay, Mr. Flirty McFlirterson.  Game on.

Turned out that he was going to be 2 blocks away at an event for his cycling group.  He invited me to join the group.  Okay, casual introductions.  I asked if I could meet him outside the bar -- just to have a chance to do introductions without having to scream (at night the bar is a cross between a club and karaoke).

We met a few blocks away, and already I knew that he wasn't interested.  He didn't maintain eye contact when greeting me and all the chattiness in the emails became one or two word answers.  And then he said it -- something to the effect of "this is not a date."  Um. Okay. Sure.  My second clue was when we got to the bar -- he didn't even hold the door for me (granted, it's not necessary, but if a guy is interested he usually pulls out all the stops).

Two of his friends were at the bar.  He introduces me to one, and then pulls out his chair.  If you were looking at us from the back it was (me) (him) (friend) (friend).  He sits down, puts his left elbow on the bar and turns to talk to his friends. He completely turned his back to me.  I get it, we're not on a date, but I found that to be terribly rude.

Five minutes later more of his friends show up and I just decided to turn on the charm.  I introduced myself to everyone, complimented the ladies on their outfits, their hair, their smiles.  They decided to go upstairs to the dancing/karaoke and I thought it was the perfect time to just slip away because he clearly didn't want me there.  But one of his friends stopped me as I was about to leave and started chatting with me.  He was charming, handsome, and funny.   He knew a bit of ASL.  I taught him some naughty phrases.  I told him my predicament.  He laughed and said "come upstairs anyways."

And it was okay.  His friends were much nicer to me than he was, especially after he disappeared for about an hour.  I had a few great conversations, had a dance party, and even did a karaoke duet with one of them (I killed it, of course).  At some point in the night he ended up standing next to me and I said something to him.  He leaned over to say something to me (including reiterating that it wasn't a date) and put his hand on my butt (which he claims he does to everyone) and I said "Sorry, butt is for dates only."

As the night ended, many of his friends said things to the tune of "I hope to see you out again." Well, considering I'm not an avid cyclist, I doubt that I belong in a cycling meetup group.  But it was just proof that sometimes good things come out of bad situations. I'm a firm believer that you can learn something from even bad dates, can still be gracious and kind even if there's no chemistry, and can even have some fun.
I didn't let the dude off the hook.  I don't know about the rest of y'all, but it always feels good to stand up for myself when someone has treated me unkindly. 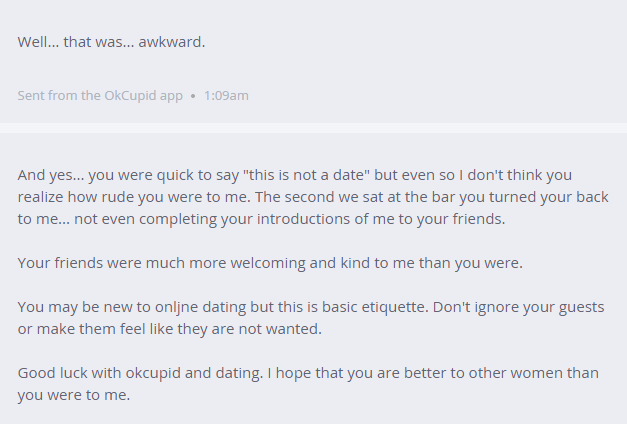 Huge pet peeve:  apologies that are NOT apologies.  I'm a firm believer that apologies need to recognize that an action caused another person's suffering (taking ownership of one's actions).  "I'm sorry that I turned my back to you and made you feel unwelcome." Don't apologize for how I feel.
And as a friend noted -- this is the guy who wrote "Over the years, I have learned to be quite outgoing and great in social settings."  Padawan, you still have much to learn.
Tweet
Labels: Dating

I'm so sorry that happened to you! What a jerk! At least his friends were nice to you, and good for you for standing up to him!
Something similar happened to me on a date a few years ago; the guy seemed flirty in his e-mails and on the phone but only a few minutes into the date he "just remembered" that he had to be somewhere else that night, and the "date" ended an hour later.

Ugh.... We're all adults. We can spend an hour with any person and say at the end "It was lovely to meet you, but I don't think I will be seeking a second date. Best of luck."

You never know who someone knows. I always imagine that the guy I don't have chemistry with is best friends with my future love. I don't want the bad date guy to say "she's a jerk... don't date her."

What a jerk. You handled yourself beautifully and I loved your comeback at the end of it

Well that ended up being much worse than I initially thought. What a classless jerk. I can't believe that he, after being rude and ignoring you, had the audacity to put his hand on your behind. Just...wow. Guys like this definitely make it hard for non-assholish guys to get a date. You definitely deserve much better and I'm sure you will find the right one when you are least expecting it.

@Jason -- um... yeah. Huge jerk. You gotta be invited to touch another human being's butt. Now that i think of it, I think I said something more like "for someone that didn't be on a date with me, you sure like touching my ass."

Good guys have it hard -- women are pretty shellshocked and bedraggled by the whole process. I think that's why we just give in and get cats.

Jerk. I despise non apologies too.
I'm glad you were able to make the best of it. You did well. Any potentials amongst his friends?

Such a weird on-again-off-again vibe. He really claims to put his hand on "everyone" like that? So strange.

I am SO glad that you wrote to him exactly how he was a jerk. THEN HE SAYS YR WELCOME TO THE GROUP. Yeah, his friends made it clear. Ha you posted his profile link! LOVE IT!!