in Dating - on 1:45:00 PM - 4 comments
My dad often loves to tell me that maybe I'm single because I'm in DC -- that perhaps I'd fare better in some hard-working Midwest city full of college-educated lumberjacks that like to build log cabins and rescue river otters in their free time.  Dad may have a point.


Dating in Washington, DC is "especially hard."
DC is one of the worst places to be single.
DC daters lie their pants off and everyone is an exceptional catch.
And even if you've managed to date in DC, that long-term exposure might have dire consequences (okay, not so dire).

But even so, I found myself in a Google Hangout (albeit a little late thanks to a partially-frozen wifi hotspot) organized and hosted by Mary El (@CupcakesDC) with a special guest appearance by professional dating coach David Wygant (@DavidWygant -- YouTube videos).  In the chat were many of DC's most lovely eligible ladies -- @SmallTownGirlDC, @SassyMarmalade (I can personally attest to her sassiness), @MangoTomato, @NikkiRap, @Frijolita, and @KahRitzTyne.

Now, I've had some run-ins with "dating coaches" that were more like "pick-up artists" (ahem, assholes) that try to manipulate (ugh, negging) women into doing what they want (i.e., casual sex).  David wasn't like this -- his overall sentiment was to reinforce authenticity and self-awareness (i.e., don't change who you are, just notice how you are). He wanted us to approach dating with our eyes and hearts open.

Rather than go point-by-point on everything that David said, I just wanted to hit on a few points that specifically are applicable to me.

"You are not as approachable as you think you are"
David said that even the most approachable woman is not 100% approachable...and he doesn't blame us for having our guard up (it's the residuals from all the douchebags that have attacked us with cheesy lines and grabby hands).  However, we can help our cause by putting down the external barriers to being approached such as our cell phones. Distractions like phones (and constantly checking them like we do) prevent us from scanning the room and seeing who is looking at us (rather, for us).  If we put down the phone, it creates a situation where we can make eye contact, flash a smile, and invite a guy to walk over to introduce himself.

The thing is this:  women are intimidating even for the most confident guy.  We have the power and ability to tell them that they are not enough. We must wield that power carefully.  We don't have to raise a white flag and surrender to men, but we can lower our cannons and have a parley.

Cultivating openness takes practice -- "Spend 5 minutes people watching in every place you go. Make it a game. Have fun with it. It will open you up."  Notice how people react and interact with you. Throw out some fishing lines and see if the water is friendly.


"Ask open-ended questions:  if you tell a guy what you want, he'll tell you what you want to hear"
Sometimes it's easier for a guy to parrot back what you said to him rather than (1) expose his true feelings/intentions (*gasps* vulnerability!) or (2) actually consider what he thinks/feels (*gasps* sincerity!).  I love the point that Patti Stanger made in her book "Be Your Own Matchmaker" -- that there's a difference between interrogating a guy and gathering intelligence on a guy.  A guy with an open-ended question will reveal himself (and sometimes hang himself) faster than when you're directing him towards an answer. Take notes, ask follow-up questions. Let him ask you questions, but don't volunteer an encyclopedia.

Most women (and men) have some sort of checklist of what they want (and don't want) in a man, and we use a first date to see how the other rates.  The thing is that dating (even online dating) isn't like online shopping where you can find the perfect product, read up on reviews, and even do personalized modifications.  People can surprise you if you let them.  And sometimes when you allow people to be who they are (i.e., give up control a little bit), they go beyond your wildest dreams. 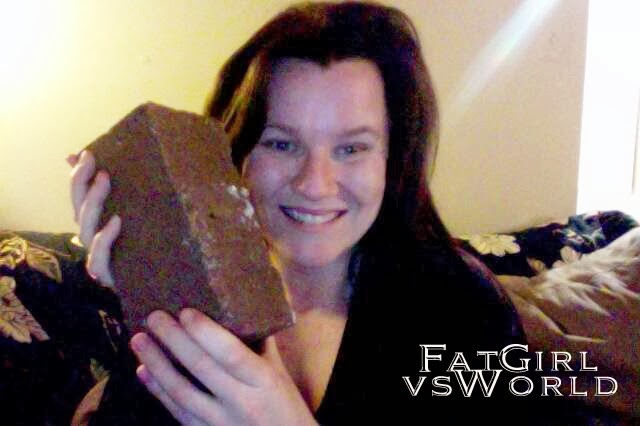 Subtle is cute and sometimes you can get away with it, but more often than not guys don't pick up on the subtle cues that women throw out.  Men aren't just oblivious, they're just not always tuned to the same frequency as us.  Women need to know what they want (in a self-aware and thoughtful way) and know how to communicate those wants in a compassionate and constructive manner.

....but that brick isn't sarcasm...
"Sarcasm comes across as bitchy in a woman..."  Again, don't be a passive doormat, but know how what you say (and the tonality of what you say) is being received.  Be nice, be charming, be sweet. Be direct. Guys will appreciate the refreshing honesty and constructive dialogue.  And if he doesn't, he's a dick.

"If someone's not able to give you what you need/want, let them go"
I think this is a lesson in grace and self-awareness.  I've always said that I'm "not in the business of changing men" to become what I want without realizing that I was always trying to change myself to be what a guy wants (or, rather, what he thinks he wants based on what everyone else is telling him).  It's okay if you've given it the good old college try and it just doesn't work.  Try to end things as amicably and compassionately as possible.  You never know who this guy knows.  Who knows? Maybe one day you'll fall for his friend and he'll say "Oh, I dated her, she wasn't right for me, but she's a really great person."  Karma, dolls, karma.

In summation....
I think what David was telling us was to be authentic and sincere, but most importantly to give guys a chance.  They're not all your ex-friend that done you wrong; they're more like puppies that just want open arms and positive reinforcement. And if what you want is a relationship, you have to be willing to provide what he needs as well as him providing what you need.

[Oh, and to address a Twitter comment that the problem in DC is "All the 6s thinking they're 10s" -- everyone is a 10 to the right person.  We're not trying to mold ourselves to be attractive to every person.  We're trying to find the enzyme to our substrate, the key to our lock, the Robin to our Batman.  Suggesting that we look for someone that is our counterpart on some subjective scale sells everyone short.  We should all have a high opinion of our authentic self -- both inside and out.  It's not vanity, it's not delusion.  It's self-love and confidence, and that's always attractive.]
Tweet
Labels: Dating

I love this. You hit some of the best points of the evening and your thoughts so eloquently sum up exactly what I was thinking.

This was fun to read. I would think DC would be a hard city because of the political scene -- people who are used to being guarded and careful of how they present themselves would be difficult to get to know. Plus there are all those young staffers milling about.

Yep! I rarely make eye contact, partly because I am looking at the floor making sure I am not going to trip on anything or looking way ahead to see what the best route is from A to B. My friends are constantly asking me if I saw this guy or that one. Nope! I am going to have to experiment with making eye contact after that I would naturally smile, clown around or give the dead eye to whomever I see depending on what they do.