Just under the surface....

in Lifestyle, Ruminations - on 6:34:00 PM - 7 comments
I'm always dubious when magazines claim "Must Read!" on the cover, but in Cosmopolitan--June 2013, the "Must Read" turned out to be something worth sharing:

I've posted a few links on Facebook and Twitter regarding Mika Brzezinski's new book, "Obsessed: America's Food Addiction and My Own."  I think that the book and all the interviews (check out this one) surrounding the book point out a really important issue, not just for our weight loss/health gain community, but a larger issue that addresses the biases and prejudices we have towards how we view other people.  I will state here that I have not had a chance to read the book. 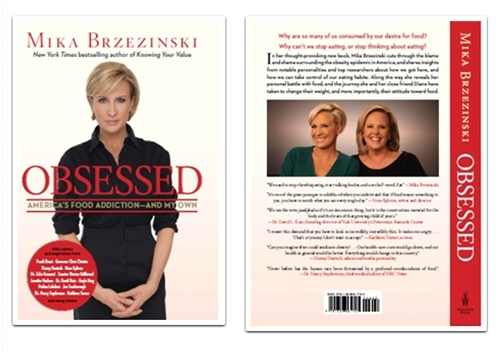 To look at Mika, you'd see a thin, beautiful, successful woman (she's a co-host on the TV show "Morning Joe") and mother.  You would never guess that she is a disordered eater (Mika is a binge eater, bulimic, food restrictor, and an exercise bulimic).  She makes a good point that "Eating disorders affect women of all shapes and sizes.  I think that's important to talk about because so many women need help." [men too!]

In other words, you could look at someone (a friend, a family member, a stranger) and be jealous of the body (thin, toned, etc.) they have and have no clue as to their daily struggles. (For instance -- time when I asked this very thin woman in a store how she stayed so thin and she smiled, revealing some of the most medieval-looking braces you've ever seen.  She said it was because it hurt to eat.)  You could look at someone who is overweight/obese and assume that they're doing nothing to take care of themselves (*makes stink eye at the random guy who once told me to "put down the Twinkies.").

And because we make these assumptions, we don't ask people how they are doing.  We assume they're okay, or aware of their own problems and are addressing them.  We assume they are getting adequate support.  The book was born out of one friend (Mika) telling her friend (Diane Smith) that she was worried about her weight (Diane was 75-100lbs overweight).  But the other half of the conversation was a confession that Mika was miserable, that she was slowly dying in her war against her body.

Mika and Diane realized that though they were on different sides of the spectrum, they had many of the same issues regarding balancing the need to eat and the terror of food, issues regarding body image and societal pressures/perceptions.  Together, Diane lost weight and Mika is learning how to be okay with having gained 15 pounds or so.

The weight loss/health gain community is wonderful, but I must admit that I see some people that choose to put on a sunshiney veneer when they're actually having trouble.  I worry that some people write one thing and do another.  Then they go radio silent because they're ashamed for not being perfect all the time instead of reaching out for help.  Or deep down they know that what they're doing isn't healthy, and so they try to hide it.

Supporting someone is easy when you're applauding their successes. But I think true friendship and love is when you're willing to risk that friendship/love to say "Talk to me.  I'm worried about how you are treating yourself" instead of choosing to look away.

The whole point of this post is just to remind you (yes, YOU) that even if you feel like you're alone and no one understand your particular struggles, that every single human being understands what it is like to struggle.  Struggle is the pathway to empathy.  And the more we talk about this with each other, the more we bring into focus what it truly means to be healthy both physically, emotionally, mentally as individuals, as a community, as a society.

It can also be easy to assume that thin people are just naturally thin (bitch!) when many are that way because they devote just as much time and energy and mental strength (whether in a healthy or an unhealthy way) to staying that way as an overweight person does to getting that way.

And no one feels perfect. If it's not your thighs, it's your nose. Or your knobbly knees, or the belly button that sticks out, or your neck is too short or too long or something.

Natalie -- you're right -- it's so easy to assume that (and I'm 100% guilty of doing it too). It takes time and focus to retrain ourselves to not make these snap judgments.

I'm going to disagree with you when you say "no one feels perfect"; until they're tainted by self-doubt and scrutiny (the plagues of adulthood), kids love themselves in a most admirable way.

Before I started blogging (over 4 years ago) I was your average, run of the mill judgmental person when it came to people's looks. But blogging changed all of that as I actually got to know people on the Interwebs and listen to their stories -- connect with them and actually understand what people are going through. So glad I'm not the judgmental idiot I once was.

Thanks for posting this. Downloaded the book.

Josie bear: I think that when we open ourselves up to understanding other people, we learn how to be more forgiving and gracious with our own self. That is, if we think everyone else is perfect, we berate ourselves for not being perfect. If we realize no one is perfect, we relax a bit.

CW: let me know what you think!

I've been contemplating on getting this book because I've bought so many self help books about eating disorders. I think I'm going to try this one if it explains how she handled it etc

Jade -- I hope this is not because you suffer from an eating disorder, but are curious about them. If you do suffer from one, please make sure you get the professional help and support that you may need.

Everyone's disorder is different and onto their own, but I will say that there's a certain sense of relief in knowing that you're not alone.