Home » Food » Swing and a Miss

Swing and a Miss

in Food - on 1:22:00 PM - 10 comments
My office announced that the Ben & Jerry's Truck would be coming around to distribute samples of their Greek Yogurt FroYo.  The masses rejoiced.  I, however, was dubious.  Why?  I (and others) knew better than to trust Ben & Jerry's to honor the deliciousness that is Greek yogurt. 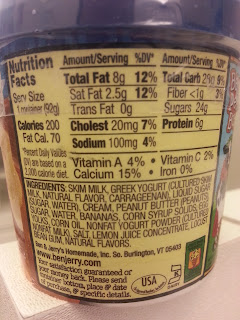 It clocks in at 200 calories for 92 grams. My favorite ice cream -- Breyers Vanilla Bean -- is 181 calories for the same amount.  Okay, so it might not have the bells and whistles of the banana and the peanut butter... but the bells and whistles aren't getting you much of anything.  Look at the whopping 100 mg of salt!  And it has a measley 6 grams of protein (my vanilla bean clocks in at 4 grams of protein).

There's a happy ending to this story -- I didn't eat this.  But someone saw me on my way to toss it and said "you gonna eat that?"  And I started to tell him why he shouldn't want it and he said "You could tell me that it had arsenic in it, and I'd still say it was delicious."

That, dear readers, is why so many people are overweight and obese -- because how they feel about food is more important than what the food provides them nutritionally.
Tweet
Labels: Food

Ice cream is definitely my weakness and I love Breyer's! I have the same Vanilla one sitting in my freezer right now but I'm not touching it for a few months. Gave up desserts except fruit for the rest of summer.

Good for you for resisting and being an informed consumer and looking at the labels. So often we get "tricked" by the words we assume mean the product is good like "natural, organic, yogurt" only to ignore the fine print.

I too love me some Breyer's, but I was SUPER disappointed to notice recently that their Chocolate Chip Cookie Dough ice cream is no longer even called "ice cream" on the packaging, but simply "frozen dairy dessert"... a quick glance at the ingredients list tells you why. It has something like 60 ingredients in it!! I very clearly remember when the ingredients list of Breyer's was simply: milk, cream, sugar, and then whatever flavor (chocolate, vanilla bean extract, mint extract, etc, etc). Why is this no longer good enough?! Not to mention the fact that it's MORE expensive and they give you LESS for your money.

I stick to plain chocolate or vanilla and do my own tinkering (favorites include grated nutmeg, honey, and Grade B maple syrup.... and well, amaretto :P )

I enjoyed reading this post. Yeah, Ben and Jerry's is soooooo busted. I love that 'exhibit A' comment, too. That was cute. One thing I need to get better at is reading labels. It's something I don't always do.

Reading labels sets you free!!
I think that if you look past all the flashy packaging and claims, you realize that most processed food isn't that good for you. And well, you deserve better, right?

I dont really think that label is all that bad... I could do without the corn syrup if i was going to be all health nutty but really the sugar doesnt bother me... I work in the food processing industry and I can tell you that yogurt is made with bacteria (duh right?) and it order to grow it needs the sugar as a food source... so just because it has sugar doesnt mean that it's bad...

That said i think that the B&J Greek Yogurt 'deserts' are nasty and i would much rather waste calories on something yummie if i need a splurge...

That's a lot of sugar for a tiny little container of ice cream, though. I dig that yogurt needs some food, but that much??

And yes, I'd classify them as nasty. I'd rather just eat some Chobani.

I'll pass on ice cream for pizza any day of the week. Pizza's good for you because it has dairy and vegetables, right? :)

Chris -- you can make healthy pizza -- have you ever seen the ones made with a pureed cauliflower crust?