What follows is a mish-mosh of things going on in my life and in my head.

1.  So remember this post about the blue dress?  Well, I wore it to my cousin's wedding this past weekend.  Apparently between the dress and my hair, I was unrecognizable to a few family members.  More than a few people wondered who I was, couldn't recognize me, or thought my dad had brought some hot date.  **falls over giggling** But best of all was my grandpa.  When I walked over to say hi to him, he said to me "Well here comes danger."  Hah!

2. Every time I get tea from the break room, I always think about my mom.  I learned to drink tea the Irish way with her -- three sugars and milk.  Years of three sugars and milk.  Even my coworkers at the Irish bar where I used to work made tea the same way.  Emily made tea the same way for me once.  It was a bit of a shock to see people drink tea with one spoonful of sugar or honey, and no milk or with lemon.  You know, kids learn what they live (both healthy and unhealthy habits) -- and sometimes as an adult we have to un-learn the bad habits.

3.  I like this article -- and especially this quote:  The action has to come first. You have to take the action before you know where it's going to lead you without knowing the outcome and irrespective of your mind-set or how you feel at the time. ~Rich Roll  I think it's very much like how Buddhists believe that control creates suffering -- if you're focused on an outcome, you stop seeing possibilities. And then there's the whole idea of "fake it til you make it" -- that sometimes the momentum of action leads to a change in behavior.

4.  #GoTheDist Stuff!!
So many of you have been freaking out about the numbers.  Not just like "Eh, I don't think I'll hit 100%, but ZOMG!! IF I DON'T HIT 100% IT WILL BE ALL FOR NAUGHT!"  Crazypants people. Absolutely crazypants.

Secondly, I want to talk numbers with you and I'd love to get some feedback.
How did you come up with your yearly goal, your quarterly goals and your monthly breakdowns?

I looked at my mileage from last year (I calculated from October 2010-October 2011, or 254 miles), factored in my neck injury (I'd need some time in the beginning of the year to rehab), added a bit to make it a bit of a challenge and I came up with 800 miles.  To allow for rehab, I broke down my mileage into two halves -- the first half would be 350 miles, and the second half would be 450 miles.  I thought 300/500 would have been too lopsided of a split.  To do 350 miles in the first 26 weeks, I'd need to average a very manageable 13.5 miles a week on the elliptical.  Because I was unable to run in January, February, and half of March, I knew I had to haul ass during the second quarter (April, May, June).  The second half of the year works out to be about 17 miles a week.  Even with my injuries, I know 17 miles is doable.  If I come up short, I'll know that I did what I could.  If I end up going over that goal, I'll be okay with it because I know I afforded my body the time to rehab.

So how did you set your goals? Did you look at what you've done in the past as a way to inform what you want to do in the future, or did you pull the number out of thin air?  I'm not trying to be judgey.  Your number is your own, but if you're not hitting your goals (or even if you're surpassing it by too much) are you being honest with yourself, your actions, your abilities, and your focus? 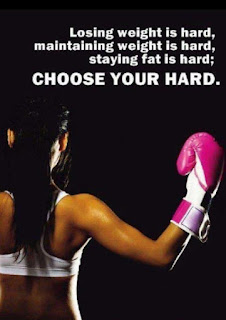 5.  I've been thinking a lot about @KCLAnderson's post "Choose Your Easy" and my own reaction to it.   She was talking about the photo to the right -- "choose your hard."

It reminded me of the Buddhist aphorism:


Pain is inevitable.  Suffering is optional.

It also reminds me of the idea of the Second Arrow as well -- because the picture to the right isn't just about the physical aspects, now is it?  The subtext, in my opinion, is that choosing to lose weight and address the psychological issues behind it is hard (not just the physical act of dropping lbs).  Choosing to change all of your behaviors for the rest of your life is a hard choice to make (not just finding the time to get to the gym or reading every nutritional label).

The picture suggest that while losing weight is hard, that staying fat is harder.  I don't think so.  I think the climb up from rock bottom is the hardest.  Being in a body that you have not treated with reverence and love is absolutely crushing some days.

I think that choosing to let go of the judgments that have prevented our actions is what's really hard.

If you've had "The Epiphany" you know I'm partially right.  While I think it's easier for someone to say they decided to lose weight because they were "tired of being fat," I suspect that the real reason was because they realized that fat or not that they were worth the air they breathed and the space they occupied in this world.  It's about New Rule 4b:  I am on this journey because of the courage I had when I took the first step.  Every step after that first one has been full of joy regardless of how my body aches or how much sweat is forming a river down my back.

Most of us have chosen to end one way we've been suffering (our poor health) and take up the temporary pains that will ultimately liberate us from that suffering.  In regards to the second arrow -- we deliberately choose the pain to which we expose ourselves.  Sore muscles.  Blisters on our feet.  Callouses on our hands.  Early mornings.  Passing up the ice cream sundae.  But we have also learned to not judge ourselves or others for it.  There's no more second arrow when we say "That's okay, I'm going to do what's right for me."  I don't know about you, but I felt so unburdened the first time I stood in a bar and told a friend "You know what? I'd rather be in the gym" and she said "Well, go do it then!"

I think that when we decide to step out of our own way, we begin to be believe that nothing is hard (and thus not worth exploring).   Sure, some days are a challenge.  Some hills are steeper.  Some choices are more plan than impulse.  But when we choose to believe in our own self  we both broaden our knowledge of what is and is not possible and deepen our ability to trust ourselves.

But when you step out of your own way, you discard any judgement of hard or easy.
All that's left is "This is what I need to do.  This is where I need to be.   This is who I am.  This is right for me."  You are not swimming against the current (hard), being swept up by the current (easy); you are the current.

No judgment.  No fear.  Just one day at a time.  One foot in front of the other.

Don't "Choose Your Hard"
Just choose yourself.
Choose your journey.

6.  Don't you hate it when you try to write a short entry and this happens?
Tweet
Labels: #GoTheDist, Challenge, Lifestyle, Mental, Ruminations

I just started a new diet and my goals are more realistic this time. I know I'll never be as thin as I once was but I can be a lot thinner than I am now.The goal I have set is very attainable so failure is not an option.

Great post and observations...I have a follow-up post coming soon (have had company so no private time..ACK!)

Thank you! Framing, framing, framing. You know I had my "epiphany" earlier this year and it has framed so many things and given me so much to work on as well as realize that I deserve the love of those around me and the love for myself.