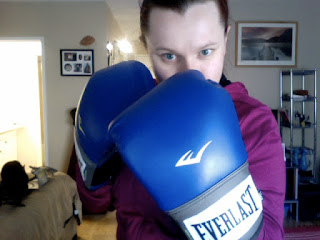 It has come to my attention that I am intimidating -- both on my OKCupid dating profile (though I recently toned it down) and in person.  This has been related to me both by men I've been on dates with as well as friends.

I've been called intimidating before, but I thought it was a good thing (my intelligence and my quick wit, or just my larger-than-life presence).  But more recently it's taken on a slightly more negative tone -- that I was overpowering people in the same way as an earthy Bordeaux (lovely to a connoisseur, offensive to the masses).

That, coupled with one guy telling me that I was basically self-centered/vain, has been a bit of a wake-up call.

A friend succinctly put it "you over-share and over-communicate."
Damn.  She nailed it.  Guilty as charged.

As BoobsBaconBourbon's Suzie put it, "[bloggers] have emotions and damn it, we want to express them."  (Thank goodness for this rebuttal.)  When I first started blogging (yes, on LiveJournal back in 2000), I consciously made the decision to put myself out there for one reason -- I thought that if I was self-aware that no one could hurt me by trying to tell me what I was or was not (the Cyrano school of thought).  That's all fine and good when it comes to blogging -- but as it has been pointed out to me that when it comes to dating, you can be self-aware all you want, but keep the iceberg to yourself and only reveal an ice cube at a time (or as a friend said to me, "but sometimes you need to restrain yourself from divulging too much").  One must to allow the other person the thrill of unraveling a mystery.  Just like Rule #1 in Creative Writing -- "Show.  Don't tell" -- I need to be patient and let the relationship develop naturally with a guy and not provide all the exposition.  (N.b.: I know enough to not show or tell a guy I'm interested about my blogs, though some are pretty crafty when it comes to finding such things.)

Sadly, the word vomit happens early on -- whether by email or in person -- I am the human version of "shock & awe" and not in a good way.  I thought that if I told people about myself, that I was creating emotional intimacy.  If there was emotional intimacy, a guy could look past my imperfect body and see me for who I am underneath all the body fat.  (I was also selling guys short, thinking either it was the only way they could see me, or that they were blind.)   But it doesn't work that way, now does it?  I need to ask more questions and listen more to create emotional and intellectual intimacy.  Like my friend said:  more dialogue and less monologue.  Only then will a guy choose to look into me, not just at me.

Another concession is that I should stop trying to orchestrate relationships with men.  As Patti Stanger wrote in her book, "Become Your Own Matchmaker," a woman's job in the first few dates is to let a man take the lead -- it is his job to plan the date, ask questions and volunteer information, to prove he's worthy.  Patti then says a woman should basically, sit pretty, smell good, and take notes.  I almost prefer Patti's version to people telling me that I should be coy or "play the game."  I mean, it's all saying the same thing, but Patti's version seems more like an active, shrewd gatherer of information as opposed to a passive giver of furtive glances and shy giggles.  Me pretending to be demure would come off as faker than Snooki's tan.  But I can be a gracious investigator.

I know there are many more pieces to this puzzle, but that's half of what I've discovered tonight.  The other half has to do with how I grew up -- from being a bit of a tomboy to a woman deeply distrustful of a man's intentions.  So, how do one go from being in the company of men, seeing how they think and play, and being invited to their inner sanctum of backyard football games to someone that is constantly wondering why a guy chooses to be around her?  I think much of this has to do with my father's job as a prosecutor.

As you all know, my mom died when I was fairly young (I had just turned 13).  She was a stay-at-home mom while my dad worked in the big city, doing his part to put bad people in jail.  My dad was senior enough in his office that they gave him the tough cases to put before a jury -- domestic violence, sex crimes, homicide.  When I was 16 my father even took me to a conference about date rape drugs and internet sex crimes.   The overwhelming majority of these crimes were committed by men.  The unintentional message that I received was that men would try to take a piece of me if I let them.  Dad wanted me to know what I was up against.

And so I became assertive with men.
Direct.
Full of bravado.
Overwhelming.
Cautious.
An interrogator instead of an investigator.

Instead of letting them take something from me, I forced way too much of myself on them.  Part of me wonders if I'm oversharing as a way of pushing guys away -- a litmus test to see if they're really interested in *ahem* all of me:  the good, the bad, the ugly, the scarred, the flawed.  I want that question answered zomgrightaway.  I don't want to risk getting involved with a guy, falling for him, and finding out that he can't handle all of me.  But that's an onerous burden to place on a first date.  The first date should be much more fun and lighthearted, no? I should be more fun and lighthearted.

I learned to be wary of men, but not how to trust them.  Sometimes being wary is warranted, but not all men are dickwads that want to hurt me. Some men actually want to give a piece of themselves to me.  For that to happen, guys need to know that I'm present in that moment, and not looking to put up a fight or to run for the hills. Some men are trustworthy.  Some men are good.  But I scare them away.

In short, I lead with the intimidation factor to see who can handle me.  I've been telling myself that "I shouldn't need to hide who I am for the right guy."  But as another (guy) friend said to me "new guys might be a little intimidated, but [I] also know tons about you etc...."  In other words, with time/patience guys see me as who I really am -- vulnerable, sincere, caring, imperfect, and wonderful. 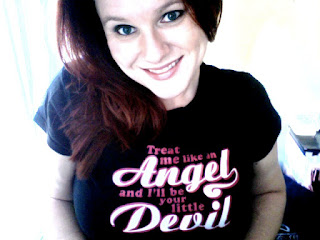 That, dear readers, is an ambush.
Tweet
Labels: About Me, Dating, Positive Self-Image, Ruminations

you be you and if they don't like it, they weren't good enough for you!

Liked how you signed off. :)

You know, I could have written much of this post, in some cases almost word for word, back when I was your age and a little younger. That's who I was. And I still am...and my husband loves me unconditionally. You will find that man and he will be worth kissing all the frogs ;-)

TTM: I don't even think about it as "good enough" I try to view it through a compassionate lens and just saw we're not right for each other.

BB: you just like the idea of a girl attacking you :P

KCLA: I think you and I are soul sisters -- we are so much alike in some ways. I'm *very* glad that there's someone out there in the world that I don't have to defend myself to -- that sees me as I am and understands the bumpy ride that got me here.

I met a girl on OKCupid about a year ago. She told me up front that she was an honest person and says what she thinks. I soon found out there's a fine line between being honest and downright rude. Sometimes it's best to keep your thoughts to yourself, especially when the feelings of others are involved.

"Princes climb towers to rescue the princess from the dragon.
Princes do not like climbing towers to find out that the princess is the dragon. "
Holy shit I love this and its amazing!!! Fierce woman, dragons, fly high, are brilliant and amazing things to behold. ;P

Dennis: I think you're right -- some people force their "honesty" on people. In buddhism there's the noble eightfold path -- #3 is "Right Speech"

Right speech is the first principle of ethical conduct in the eightfold path. Ethical conduct is viewed as a guideline to moral discipline, which supports the other principles of the path. This aspect is not self-sufficient, however, essential, because mental purification can only be achieved through the cultivation of ethical conduct. The importance of speech in the context of Buddhist ethics is obvious: words can break or save lives, make enemies or friends, start war or create peace. Buddha explained right speech as follows: 1. to abstain from false speech, especially not to tell deliberate lies and not to speak deceitfully, 2. to abstain from slanderous speech and not to use words maliciously against others, 3. to abstain from harsh words that offend or hurt others, and 4. to abstain from idle chatter that lacks purpose or depth. Positively phrased, this means to tell the truth, to speak friendly, warm, and gently and to talk only when necessary.


Crista: And think about all the s'mores! **burps fire**