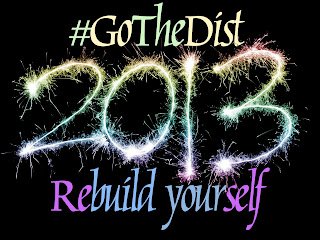 Remember that feeling on January 1st, waking up from a champagne haze and promising that this year, this time, things will be different?  Well, 6 months have passed and what have you been up to?  Are you making headway on your resolutions?  (Or in my case, did you even make a resolution?  Whoops.)

Chances are that somewhere along the line, you've struggled a bit.  Some of us have small struggles (one beer too many to want to get up at 5 am to get to the gym) and some of us have big struggles (injury, illness, life).  It's okay.  If you're still here to read this, you know that you can recover from just about anything.

But let me ask you this:  is it enough to just recover/to get by or do you want to thrive?  It seems to me that so many of our resolutions are things that we should already be doing to take care of ourselves.  In other words, for many people pledging to take care of themselves (inside and out) has become a once-a-year event that is soon forgotten (kudos to those who are on the ball and renew this vow more often).

Along comes July 1st -- the first day of the second half of the year -- and another chance to state your intentions to the world about what it would mean for you to thrive, to love deeply, to laugh heartily, to live fully.  What have you learned in the first six months that you'd like to improve upon in the next six?  What would you like to change up?  What are you proud to have accomplished? What have you done in relation to the theme "Rebuild Yourself"?

Kudos to all who have done especially well in their #GoTheDist pursuits -- Jordy (@ItsJordyLive), Cari (@TravellingCari), Sue (@PhoenyxRysyng),  Carolyn, Nate, and Rashaan (@rashaan) -- keep it up!

Now that I'm a less paranoid about my neck, I want to get more diversity into my workouts.  I know that I suffer from monotony.  I want to get back to boxing (even if it's just shadow boxing) -- because I loved what that did for my arms, and my mind.  I want to kayak -- it's a great workout, fun to be in the sun, and a social activity that doesn't involve copious amounts of drinking (see below).  I want to try spinning again (**waves to JZ and RevolveDC**).  I've also promised friends that now that my deltoids don't hurt as much, that yoga is now in play.

My food logging was hit-and-miss, and I want to improve on that for the next half of the year. I find that I would be good at food logging on the days that I was bringing my own food to work, but then would fall off the radar when I would go out to eat and feel overwhelmed by estimating (do you know how many calories are in a serving of shrimp lababdar?).  So I think that means I need to meal plan better (I'm so in awe of you all that do this well) and carry a portable food scale with me.

I also want to focus on being more moderate with alcohol.  I've been good, but not great, and I see how that affects both my performance and the scale.  So, from here on out, no more than 1-2 drinks a day.

In terms of thriving -- I want to improve on my introverted nature.  I want to make more "play dates" with friends as well as go on more actual dates with guys.  (NB:  I did go out with a guy from OkCupid last night -- it was rather spur of the moment, but well... he took me to the Old Guard Stables and let me meet the horses of the caisson as well as their friends that were hanging out for the week -- the Budweiser Clydesdales.  We went to dinner after and got talk about life and dating and especially online dating -- and he said to me "I don't think girls get it -- it doesn't matter how much you weigh or what you look like, just be confident with who you are.  Nothing as unsexy as a girl that feels sorry for herself."  Point taken.  I don't feel sorry for myself, but I often fear disappointing people.  No more.  Gunsablazing!)

I also want to honor my inner nerd and take some classes on the things that interest me and/or the things I have put aside since I left college.

So anyways, those are just a few thoughts.  I've also put (actual) pen to (actual) paper and started thinking about a "bucket list."  Next step with that is putting $ to bank to start saving for some adventures!
Tweet
Labels: #GoTheDist, Boxing

Yay for that last one! (and for all the others as well, that is)