"Jump and the net will appear" ~ John Burroughs (?) 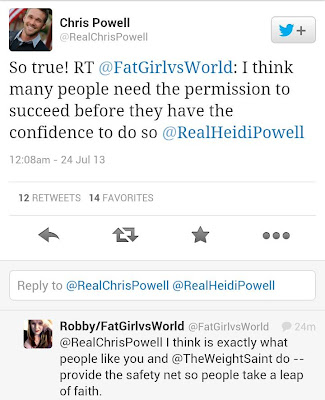 I've met so many people who ask me one question in regards to the whole weight loss/health gain journey:  "Where do you begin?"

I think people ask that because they're afraid to fail in the early stages of the journey, so they want to follow someone else's path.  That's okay.

But, I think I'm going to have to take that all back.

That's really all after the fact.  The Epiphany has to happen first.
That's a tall order for some people.  Some people need a little help.
They need to hear the words from someone who has been there before, who has done it before, that it is indeed possible.  My dear friend Emily gave me the (subliminal) permission to succeed.  Not only has she given me good advice, but by her own success she has shown me that it is possible.

Think back into your past -- who gave you the permission to take the leap of faith?  Who provided the net? It's like the parent who held the bicycle until you were strong enough and confident enough to say "I've got this now."  You were doing the work, but sometimes you needed to know that someone was there just in case.

Now think about the person that you've inspired, or that you're going to inspire.  Kinda tickles, eh, to think that little old you can be the catalyst for someone to go on the adventure of a lifetime.  What do you want that person to gain from knowing you?

And I'll call BS right now on anyone who thinks they did this 100% on their own.  Even if you don't realize it, someone showed you what was possible.  But kudos on you for taking the leap.
Tweet
Labels: Mental, Ruminations