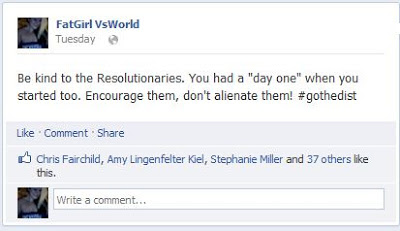 I posted the above on New Year's day.  I saw people posting on Twitter and Facebook their disdain for "Resolutionaries" -- people that join gyms at the beginning of the year and take up time/space on the machines and in classes.   Ever think that you were once that person?  It might not have been a new year's resolution, but someone might've looked at you and wondered what the cat dragged in.  Someone might have considered YOU to be the one out of place and not belonging in the gym.

But you're not a scared neophyte anymore, are you?  You know how to use the machines.  You let people "work in," you wipe down your equipment, you figure out how to make space in a crowded class for one more person.  You've realized that we're in this together--that when one person succeeds, we all benefit.

I just want to take this moment to remind my readers of The New Rules and Rule No. 1 (no, it's not "No one talks about fight club):  leave no one behind.  If someone works up the courage to make it to the gym, or to ask you how you've achieved success, don't you feel like it should be your duty to help them?  Even if it's just 5 minutes of your time, I feel you should honor the trust that they've placed in you as someone they feel they can learn from or be inspired by. 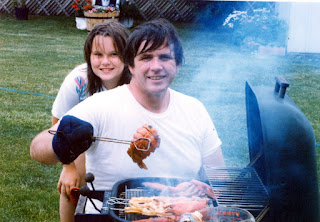 You all know that I talk about my family, and my family's history/attitudes with food and weight.  This year, I'm proud to say that my father has had the beginnings of the epiphany.  While I was recovering from surgery, Dad and I watched "Fat Sick and Nearly Dead" and something just clicked.  In the documentary, Joe Cross reshapes his health and weight by doing a 60-day juice fast.  Joe not only loses weight, but he reverses the effects of an auto-immune disease that causes rashes/hives to form on his body.  (Now, I don't recommend that anyone goes on a juice fast without the guidance of their doctor, but I wholeheartedly recommend people look at just how much fruit/vegetables they have in their diet.  Chances are you're not eating anywhere near the amount of fruits/veggies that you truly need.  Juicing is a great way to supplement your diet as a way of getting more fruits and veggies into your body.)

It pleases me to no end that I'm getting emails and text messages from my dad telling me that he's bought a Vitamix (the heavy duty blender that make Starbucks Frappes or Jamba Juices) and a Breville Juicer, that he's gone to the grocery store and has picked up fresh produce to play with, that he's trying out recipies and beginning to tweak them (for instance making a Manhattan clam chowder-inspired soup with sauteed calimari instead of a cream-heavy bisque).  I'm trying to show my support by including juices in my diet as well (today I'm drinking a spinach, blueberry, mango, celery, ginger juice), and sharing the ones that taste good (fresh ginger does amazing things). 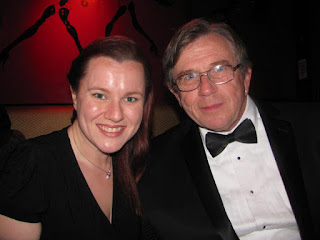 Dad had to come to the epiphany in his own time and in his own way.  But now that he's there, I'm so proud to support him on his quest to be a healthy role model for his whole family, on his journey towards living a long life, and on the healing path for his body.

Growing up, I always heard from Dad's coworkers that he's always saying how proud he is of his kids.  I'm glad that now I get to return the favor and say how proud I am of him.

I was just telling my roommate that we need to get a juicer because I don't like to eat vegetables but I love juice. I might have to wait until next paycheck, and it'll surely be wasted when I leave the country, but if it'll help me reach my goals, then its worth every penny, right?

SOOOOOOOOO happy to hear about your dad. Oh, man...I love those kinds of happy stories.

This year I have had 3 different people ask me what my resolution was and when I said I don't make them, they told me what they thought my resolution should be. Then each person expanded at length on that idea even though I was not interested. One individual spoke to me in a threatening manner about how she was going to force me to follow her plans.
My point is that we can all stand to mind our own business a little more and also drop the "If you are not with me, you are against me" attitude.
Can you tell the resolution thing is killing my buzz lately?

I actually just recently got a really nice juicer from Groupon, and I'm thinking about doing one of the "Reboot" plans on JoeTheJuicer's web site. Even have my hubby planning to join me on it, since it's a good way to get additional veggies in.

Love the pic of you and your pop!

I love this!! Everything about your dads epiphany and realizing that everyone's journey, reasons and experiences are different. I think it would be pretty boring if everyone had he same story to tell. I'd say take a "revolutionary" under your wing and help them. Pay forward knowledge and it will re-enforce your own habits.

Hi! I'm a new follower! I'm a new blogger also writing about my weight loss journey. I'm glad attitudes have been changing and I look forward to reading more from you :)

Good to remember having the right attitude. Good thing disdain isn't really a problem at my gym.

Chubby McGee: All you can do is love your parents and support them while they learn how to take care of themselves.

Cindy: People have good intentions but don't always know how to use their words. But on the same token, isn't it good that we invest time and care into each other?

Sue: isn't it great that you don't have to go it alone? well... you have me... you'll never go it alone :P The second photo is from my dad's retirement dinner. He was so happy that day. I always want him to be that happy.

Christa: I think to say that everyone's path is different is an understatement -- mainly because that "path" is more like a minefield.

Katie: Welcome to my blog! I will check out your blog and I hope you find something in mine that resonates with you.

Chris: I think when people spend time at the gym with only their thoughts, the inevitably become uncomfortable and find it easier to think about other people and be judgmental than to think about how they can improve themselves, no?

I am so Happy with your dad..... Useful Article posted by you.... Thanks

This was a beautifully articulated article! I loved hearing about your dad & the health connection you both share & you're so right about once being hat new person at the gym & how thee is always room for one more! Someone once or twice or however many times it took, made the time to help us, we should pay it forward!

Resolutionary is a word that just ticks me off. Especially when it comes with the back handed complement hanging right off of it. (I know you're here, you're just going to quit, so go ahead and do it and save us all the trouble). I AM that person - I struggle each time I go to the gym. I hate being looked at like I don't belong somewhere. I"m trying to get healthy - I don't need judged by someone who doesn't even know me - heck, I do that enough on my own.

@meeyra -- there's always room for someone that wants to be there.

@Kelli -- I can't speak for other people, but when I use the word "resolutionary" -- I'm more talking about the timing of when people coming to the gym versus their intention or commitment level. I look at it all the same way, if you're there and you're doing the work, then you deserve to be there, no matter the time of year.