in About Me, Advice, spine - on 12:12:00 PM - 7 comments
I've said before that I'm thankful for the technology and skill that were combined to help give my neck a new lease on life.  But there's another unsung hero in all of this:  my medical insurance.

I don't want to get into the tangled mess of politics/economics regarding medical insurance on my blog, but I do want to say that the question of "how much will insurance pay?" has weighed heavily on me.  With or without insurance, I think everyone has wondered the same or similar when it comes to medical issues -- "how will I pay for this?"

Even though I received a letter stating that my surgery would be covered, I've been sitting and waiting for the bills and insurance claims to roll in. 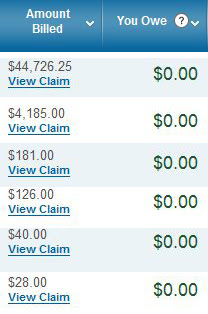 Part of me wondered if they were going to cover 100% or if I'd still be on the hook for some of it.  I tried to clear all the debt off my credit card as well as build up my savings.  My dad even said he'd help me if it came to that.

I braced myself for the fallout.

A fallout that never happened...

Well, it's also a huge responsibility:  I've been given this very expensive second chance, and it's up to me to take care of my neck as well as my overall health and wellness.  You know, to not squander this gift.

Just thinking about this made me feel guilty about all the years I squandered a relatively healthy body.  Do you ever go through that?  Once I turned 18, nothing and no one was preventing me from leading a healthy life except for myself.  Yet, it took many years for me to figure this out as well as to come up with plan.  It took even longer to act on it.

I try not to entertain futile thoughts, such as "if only I had figured this out sooner..." or "if only I had acted on this sooner..." but every now and then they sneak their way in to my brain only to be answered with an impassioned "Do it now!  Make it count now."  (Every now and then a little brain cell knows exactly what to tell the rest of me.)

And that's all we can really ask of ourselves -- to learn the lesson and to evolve.

I'm not saying you shouldn't be grateful, but you'd think that for $50K, they could make it so your neck could spin around like an owl. How cool would THAT be?

Jack: I was hoping for WIFI or for some stegosaurus spines. That would be fun.

When you run, does it make that sound from the Bionic Woman whenever she went all. . . umm, bionic?

I am so thankful for insurance. The small surgeries here and there, medications and multiple appointments I have to go to would be so incredibly expensive without it.
I know you won't squander this opportunity. You're amazing!!! *hugs*

**hugs back** thanks Christa!

I sing the praises of insurance also!

We've had other costs that weren't covered like Jerry taking time off work and me not able to work for a long time, but as far as the medical bills... they totaled around $800,000. and we had to pay roughy $3,000. of that.

As for "if only"... entertain that only long enough to allow it to prevent this day/week/month/year from not being an "if only" memory in the future. (hope that makes sense)

Go the distance... because you can!

I can't imagine your bills -- plus all your husband's time off of work! So many people stress over "am i going to be able to pay for my care" and it creates stress that undercuts the treatment.

You're right that I try not to entertain the "if only" too long -- but i do use that feeling to pay homage to the person that was strong enough to get me to where i am....