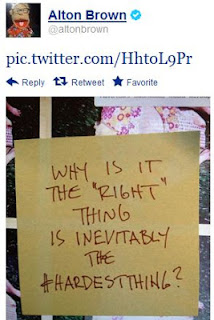 "Sometimes the hardest thing and the right thing are the same..."

We've all been there, right?  The days when we want to do it the "easy way" (caveat:  that means so many things to so many people, so I'll try not to offend and I apologize if I do) -- when we want to lose weight without exercising, when we want cheeseburgers to be healthy, and we want to be cured from ever having been unhealthy in the first place.  If you haven't been there, count yourself amonth the lucky ones.

It's easier to buy a box of waffles than to make them from scratch. Don't even get me started on cinnamon rolls.  It's easier to sit on the couch than to go to the gym and put in the work.  Sometimes we're so focused on the results (mmmmhmmm waffles) that we start making up excuses about the behaviors ("just this once won't be a big deal").  And worse -- we start believing those excuses.  Isn't that how this came to pass in the first place? And I'm not just talking about food or exercise, but isn't it easier to ignore our emotions than to actually deal with them?

We arrive at a place where we what we do matches what we want for ourselves and our lives.  Our behaviors show the world how we feel about ourselves.  There's no more struggle or strain.

We learn to be at ease with ourselves when we do right by our body, our mind, our spirit.

It was only hard because we had to learn how to how to honor ourselves after years of doing everything but.

Perfection is so boring :) Hope you're healing well!

Mojo -- perfection can be boring -- but it can also be very different for everyone. I aim for imperfectly perfect. I achieve it every now and then.