in Food, Ruminations - on 9:00:00 AM - 6 comments
As part of the launch for their Generation Fresh/Spices4Health campaign, McCormick Spices generously invited some Fitbloggin participants to their campus in Hunt Valley, Maryland (recap here).


1. Take everything you learned here today as well as your McCormick herbs and spices and freshen up your own favorite recipes.

2. Share these freshened-up recipes on your blog and with us.

I wanted to do this. I wanted to be a good little blogger and follow the instructions, but I kept remembering one comment during the tasting experiments -- about how olfaction (smell) and taste are located right next to the part of our brain (the amygdala) that holds our memories and touches our emotions.  After all, my blog isn't about recipes or exercises, but it's about emotions. 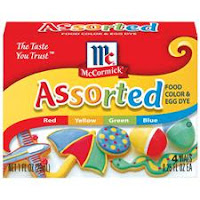 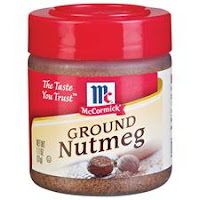 Every year, my mom would pull down from the cupboard my grandmother's old/repaired tilt-head stand mixer with ceramic bowl and we'd begin the process of making her Aunt Elva's "Refrigerator Cookies" -- we know these now as sugar cookies.  We can find them now packaged in tubes and buckets in any grocery store, but back then these were special.  Making these cookies with my mom were some of the best memories in my life.  I learned why we cream butter and sugar, and that after beating in the eggs was the best time to add the vanilla extract or food coloring (she'd let me use food coloring and make the cookies in any color I wanted using McCormick's little gnome-like bottles).  I feel close to her as I repeat the steps the same way as I have for over 20 years.

What set these cookies apart from the standard sugar cookie, is that before baking them, we'd roll them in a mixture of sugar (sometimes colored sugar) and nutmeg.  That little half-bottle of nutmeg was a special occasion spice -- the very signal of the holidays.  When the cookies came out of the oven, we'd give the cookies another dusting of the sugar/nutmeg mixture and shake off the excess.

After my mom died, a friend's mother did the most wonderful and meaningful thing ever -- she invited me over to make cookies with her and her two very handsome sons.  We followed Aunt Elva's recipe, down to the nutmeg.  I'm not sure how my mom would have felt about the camouflage-colored cookies (okay, they were vomit colored, but I was trying to be kind to Pete) but I know she would have approved of the number of cookies we made to give away to the local food kitchen that year. 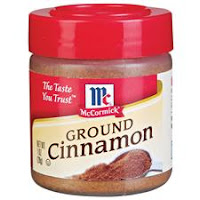 Cinnamon
I know my dad reads my blog, so I will not give away any of his cooking secrets (the few that he may have).  HOWEVER, I will say the times he's tried to put nutmeg into his apple pie were valiant efforts towards innovation, but I'm a purist when it comes to my dad's apple pie:  apples, lemon juice, corn starch, cinnamon in hand-made crusts.

At the McCormick taste testing, we blind tasted two different types of cinnamon -- their red cap cinnamon and their gourmet cinnamon -- and I knew instantly which was which.  My family consumed more cinnamon (in their 2.37oz bottles) more than any other spice (okay, outside of black pepper).  Cinnamon toast, cinnamon on eggs (it's french toast without the bread), cinnamon on everything.    One taste of the first applesauce and my mouth/brain connection transported me to Thanksgiving and Christmas (the two yearly appearances of Dad's apple pie), and more importantly, the mornings after when I was allowed to eat pie for breakfast.

This red-capped bottle witnessed my father and I trying to build our relationship from scratch:  we learned to work together, listen to each other, and compromise over that apple pie.  If you want to warm the cockles of my heart, you slice an apple, toss it in the microwave until it starts to get mushy and then top it with some cinnamon and all will be well with my world.  Better yet -- you'll call my dad and tell him to bring me a pie. 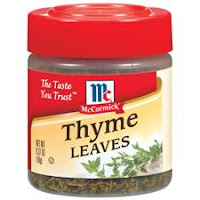 I used to hate spinach.  I think I hate it before I even tried eating it.
But never-the-less, you would never see me eating it.  We were an iceberg lettuce family!

That is until my dad's stepmother ("Ma") introduced me to Spinach Balls.  The basic recipe (per the internet) is usually the same, but they often have "Italian Seasoning" or "finely diced onion" as part of their recipe.  Ma's recipe is much more explicit about the additions -- the Parmesan cheese was to be freshly grated, and instead of generic "Italian Seasoning," one spice was called out for its extraordinary relationship with spinach:  thyme.  The recipe always called for ground thyme, but my mom used the dried thyme leaves.

Thanks to the addition of thyme, I love spinach.  I don't need to make the spinach balls to bring these two together, as I'm often just microwaving some frozen spinach, adding a bit of Parmesan (or other salty hard cheese like Pecorino Romano, or Asiago), some black pepper, and the requisite thyme.

I love watching people who have never liked spinach try Ma's take on the spinach ball.  I have never once had a party with any spinach ball leftovers.  Always the one to make us grandkids eat our fruits and vegetables, Ma would be proud that I think of this recipe every time someone asks me to bring an appetizer, or even when I'm in the kitchen with some spinach. 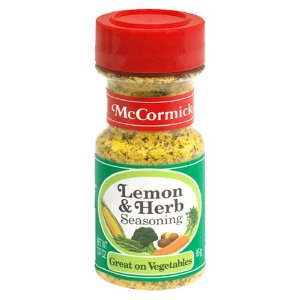 Lemon & Herb
After my mom died, I ate to comfort myself.  I've told this story many times without ever really talking about what I ate.  Sure there were the quick and easy meals that my dad brought home (McDonalds, pizza, and Chinese), as well as the sugary pastries, but there were also the cheap and easy go-to meals that Dad could trust me to make at any given time (such as spaghetti with meat sauce).   But when I longed for something that reminded me of my mom, or there was a special occasion that merited this dish, I'd make my mother's breaded chicken.

For a second, we'll ignore the fact that she basically deep fried chicken breasts in vegetable oil to make the breading nice and crispy (and yes, I can make the dish just as tasty baking it) because the important point was that this was her secret ingredient in an otherwise familiar dish.

McCormick pulled this seasoning because they had issues with the amount of water/condensation it could absorb. It would eventually cake up and become unusable.  They even have a "Perfect Pinch" Lemon Herb seasoning, but I hear it's just not the same as Lemon & Herb.  Just as well, no one could make it as good as my mom.

I could go through each red-capped bottle on my Lazy Susan and tell you a memory or a person that belongs to that spice--such as the peppermint extract that belongs to my Nana and her choco-mint snaps, or eating fries smothered in Old Bay (now owned by McCormick) with my friends in Rehoboth beach, or making Alejandra Ramos' Italian Rainbow Cookie Cake with neon colors for my friend Emily.

I can only hope that one day someone will remember me by my Hot Madras Curry Sweet Potato Soup, or that how much black pepper I attempted to put on one piece of steak, or in one pot of chicken soup.

So, I encourage you to play with your spices.  Take a sniff of each one and try to associate them with a memory, a person, or a recipe and share those memories either with me or your family!  Build new memories with each new flavor.

Great post! I loved reading about all those memories. I have never heard of eating cinnamon on eggs before, but that sounds interesting.
What was the difference in the red cap and gourmet cinnamon's?
Is there a recipe for those spinach balls? They sound awesome! Thanks

700:
The difference between the red cap and the gourmet cinnamon is where they are from! The local soil and climate changes the flavor quite a bit!

Click on the words "spinach balls" and there's a link to a similar recipe -- but I'm not giving out all of my grandma's secrets ;P

Spicy Spice makes me sound like a rapper, eh?

I love this post! I love personal stories and memories. Growing up, my families spice collection consisted of salt, pepper and onion salt. My palate, and spice rack, has expanded since then. Cinnamon is definitely a favorite. I love doing a mixture of cinnamon and paprika on homemade baked sweet potato "fries." And since moving to MD/DC, I've become a fan of Old Bay.

I loved that tour too! Such a great recap idea of the different spices. I know when I told people about the tour my friend started asking and remembering their own memories of the red cap bottles. Mom and I even started plugging some of her spice bottles into their site to see their "born on" date and she nearly peed her pants when paprika came up as born in 1993. OMG time to go shopping Mom! Guess it wasn't as much of a "staple" as she claimed!