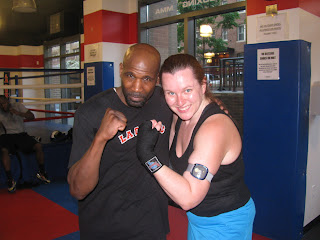 First, a word about the gentleman on the left:  Randolph Kennedy (his personal training site: http://www.rescueworkout.com/).  His LA boxing bio cites his certifications, boxing pedigree (learning from  Olympic Gold Medalist Charles E. Mooney), and personal philosophy, "our outward appearance is a direct reflection of how we feel inside."  It also mentions that he teaches a wide age range of students.  What it neglects to spell out is that he is remarkably knowledgeable about boxing, infinitely patient (you have to be with me), and capable of wrangling a class full of people at different experience levels.

If you are interested in learning a new sport, like boxing, I think it's important to find a teacher like Randolph.  You can go to a cardio boxing class or TaeBo and learn to mimic/approximate boxing, but it's just not the same as learning the actual fighting discipline.  Boxing is a rigorous sport and has a very specific movements attributed to it.  Randolph is able to watch you and diagnose your movement.  He helps correct you on the spot (so you don't hurt yourself or don't get hurt) and builds not only your knowledge, but your confidence.

What I like best about Randolph is that he doesn't sell anyone short.  If you're doing something wrong, he'll guide you into figuring it out for yourself versus bringing you down a peg.  For example, during my first class with him a few weeks ago he told me to throw a jab and I stupidly threw a cross and he said "Try that jab again."  I threw another cross before the little light bulb in my head went off and then I threw a proper jab.  He smiled and said "ah, you figured it out."  Gradually our bodies will catch up to our minds.

Okay... back to the subject line:  the first rule of Fight Club is: you do not talk about Fight Club.

Luckily, the LA Boxing Technique class/sparring technique class is not bloodsport.  In this class, not only are we learning from Randolph, but we learn a great deal from each other (and the other trainers that are often in the gym during the class who will step in and offer help, such as Ed (see photo below)).  There are people who are more experienced than others, and even the inexperienced people are able to offer up feedback and ask questions that the more experienced people can learn from.

When we practice with/spar with each other, there is a great deal of control and trust between each member of the class.  Our aim is not to hurt each other, but to improve our technique, movement, and timing both offensively and defensively.  I just really want to make that clear as some people say that they are not interested in hurting other people.  Well, neither are we.  That's what protective gear is for (or if someone isn't wearing protective gear, you use control/discretion and leave it for the heavy bag).

I wanted to introduce you, by way of photos, to some of my classmates (some classmates left before I could get my camera out and/or didn't want their photo taken).  Some know about the blog, some don't (but hopefully they'll be checking our their photos **waves**)--but just about everyone in the class agrees with me with the assessment I made in my last LA Boxing post (which I am now making the first rule of my fight club/New Rule #7:   your size, shape, age, gender, or experience level doesn't matter as much as your focus, determination, and heart when it comes to the boxing gym.  What matters most is that when you are in the gym you are 100% committed to learning and trying your very best, whatever your best may be on any given day.

Our class meets Mondays and Wednesdays -- but there seems to be a regular cast of characters.  I'd like to thank them all for being a part of my fitness journey: 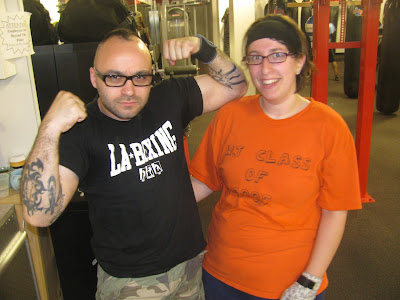 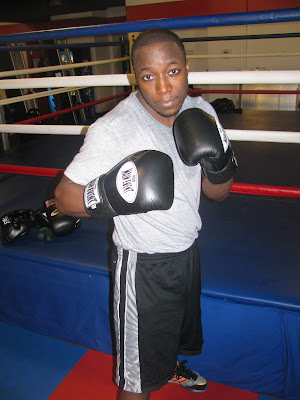 This is your life and it's ending one minute at a time.  ~ Fight Club
What are you doing to live deeper, live healthier, and live happier? Are the connections you're making with the people around you furthering your goals?