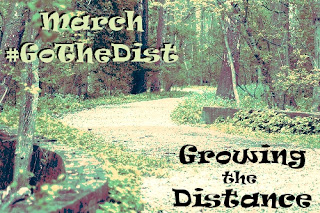 A HUGE thanks to Simon/@CyclingSi for graciously writing the March #GoTheDist Wrap-Up.  It has been an honor and a privilege to see him on his journey, and especially to see him achieving his goal this month.  Exciting stuff, buddy!


March, for me, is the gateway into spring a time of renewal, change, and growth--not just in nature but in us as well. I have participated in all bar one of the Go the Distance challenges from October to the present. But with the exception of the first month, they have not gone so well--with illness and bad weather being a constant problem.

I am not really sure what the change was this month--possibly the improvement in weather; maybe the week off I took in February--but there has been a total change in my thinking. The change is not just about my training, but life journey as well. I found myself letting go of a few more fears and insecurities, freeing my mind to focus on things and people that really do matter to me.

The challenge was a simple thing to set: in addition to starting to record my calories once more, I set my now-standard 100 mile goal, but I also added a 10 miles of trail walking to the mix just in case the weather turned nasty. Given that I had only ever got close to my goal last October, I was concerned that I had bitten off more than I could chew and that I would fail again. This month I was to prove my fears were unfounded.

One thing that I have wanted to do for ages was to ride out in the back lanes and the open road away from the cycle paths. However, I have been worried about how I would handle the roads and, more importantly, how I would cope with riding up hills. As March’s focus was about growing, I outgrew my fears and headed out onto the open road and straight up the first hill I could find and straight over the top.

I think the only real down point this month was going too long with out a rest week. As a result, 2.5 weeks into the month I hit the wall, so to speak. I was now tired and in need of a break. So I just limped to the end of the week and rested for a week, with a few light rides before picking up the intensity (starting to think about increasing the time and distance).

For the future, I have learned that I have to change my riding patterns and go with two hard weeks, and then a rest week (instead of a 3-1 pattern) and to do 3-to-4 bike workouts a week with a rest day in between to maximise my energy and recovery. Lets face it, I am not as young as I used to be but I will be fitter than I was!

This has been my best months riding in years, let alone since last October.

The challenge has helped me to grow stronger, both physically and mentally. I have seen some of my fears crushed under my tyres and let out triumphant yells as I crest each hill. I am not just talking about those on the road either: to quote Gunnery Sgt Hartman, I am “Born again hard” and I am loving it too.
Tweet
Labels: #GoTheDist, Guest Post