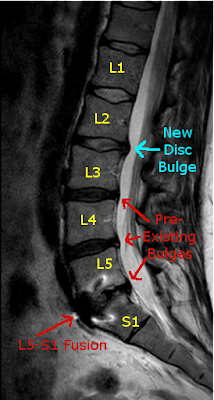 OR just hope that with time that my spine will get its shit together (this has not been the case thus far).
Tweet
Labels: spine

Your post in very interesting. Sometimes i am scared of the unknown too because I am too fat. Its not easy living as a fat person. Well, since I have a bit flattened belly, it helps to reduce my fears about being fat when I used this product.http://bit.ly/2D5dzZk Thanks for your post..Try it http://bit.ly/2D5dzZk

Our family are diabetics, my grandfather had his two legs amputated, and out of the 9 siblings, my mom also got one of her leg amputated. And now me, i was diagnosed with diabetes, and i really need to be careful if i dont want to follow in their footsteps. I am what you can classify as obese, so i have to work double time to trim down my weight. I am trying now this new regimen for almost two weeks now and so far im quite satified with the results... Hope you will try it too because it really works for me... I have already shed some pounds...