in spine - on 12:54:00 PM - No comments
My lower spine issues started when I was in HS (1997):  A beefy linebacker bodychecked me into a wall during an game of speedball in gym class.  I was walking around bent over for a week.  But I didn't go to the doctor.

In 2000, I was in my forensic anthropology class at the Smithsonian Museum of Natural History.  I was bent over a lab table examining specimens and just couldn't stand up straight.  I went right to the GWU ER.  They took x-rays, gave me pain medication and NSAIDs, and sent me for followups with a specialist.  That specialist (older male, I forget if he was ortho/neuro) asked me if I was having "too much rough sex."  I shit you not. He sent me home with a pamphlet of old people having sex.

In 2006, I went to a ortho because I was experiencing pain/numbness when I was sitting.  This is also when I noticed how my hip would click.  They did an x-ray and they diagnosed me with a generic "lumbar strain" and "bursitis in hip." But I was also told that the pain was from being overweight/weak and that I should go to PT and lose weight. 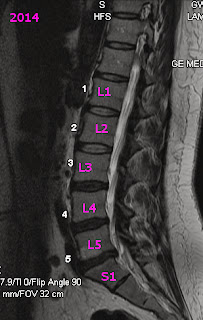 In March 2007, I was at a Flogging Molly concert (Shamrockfest!) and the guy behind me lost his footing, grabbed my waist to stop himself from falling, but he ended up pulling me down and about 7-8 other people landed on me.  Instead of going back to the dismissive ortho from 2006, I went to a chiropractor.  This was the first time a doctor took a detailed medical history, family history, and the first time any doctor prescribed an MRI (10 years after the initial injury!).

This was a little before radiologists would load scans on to a CD -- so they sent me back to the chiropractor with a large folder of all the scans.  He puts them up to the light and within seconds says "This. This right here is why you're in pain," as he's pointing to the three blackened discs on the scan, "Oh, and when did you break your tailbone?" (During middle school, my band teacher managed to push me off a riser/off my chair, and I landed hard on my tailbone.  I had to sit on a pillow for weeks, but my parents didn't take me to the doctor.) The chiropractor then went on to explain disc morphology and what the MRI meant. Not only were the discs bulging, but they were deteriorating.

In June 2007, I went to a spine surgeon with my scans to get his appraisal.  This is when I was told two things:  (1) that i'd need a fusion and (2) that I needed to wait because anytime you operate on the spine, you could make things worse.

Followed up in December 2010, but that same doctor was a bit dismissive.  He said I was doing well managing the injury, but that he didn't want to see me until I was in a wheelchair.  That was a bitter pill to swallow.  As I once wrote in this blog, "It's hard trying to live in the shadow of that comment – it's like playing Russian Roulette.  'The Big One' (i.e., the incident that puts me in a wheelchair) could be from doing some crazy activity or from sneezing and anything in-between.  That thought has not liberated me to go balls to the wall; it has paralyzed me to the point that I might as well be in a wheelchair." 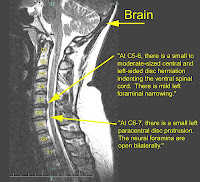 Mid-2011 was when my then-boyfriend damn near made me a quadriplegic by pulling my ponytail too hard/the wrong way.  We tried all the same conservative treatments to no avail:  Ice. Oral steroids. Physical therapy. Epidural steroids. More PT. But the pain and weakness in my arm never went away.  By September 2012, I knew I couldn't continue with exercise or boxing.  I got referrals to specialists, got a second opinions.

On December 2012, I had my C5-C6 artificial disc replacement.

All was pretty good until May 2014.  I was in the shower and lost feeling to my leg.  I went to GW ER and the attending doctor wanted to give me drugs and get me out of there.  I kept insisting that something was very wrong.  Luckily, I had my surgeon's email address and I reached out to him, saying that I was in the ER and something was wrong.  Five minutes later, the ortho resident on call was admitting me.  (Blog post, "He's got my back") We did another MRI and discovered that during the fall, I managed to displace a vertebrae (retrolisthesis) when I hit the side of the tub. The rest of 2014 was pain management.

In 2015, I got the worst diagnostic test EVER.  The discogram had me screaming in pain for 30 minutes and didn't produce the intended data because I couldn't differentiate where the pain was coming from while my whole lower back was spasming.  I will never do that test again and I'll slap a doctor if they recommend it to me. (Blog post, "Testing My Limits") We scheduled my surgery for May 4, 2015 ("May the 4th be with me") but when my doctor's scheduler called to reschedule, I was feeling good.  I told them I'd call them when I was ready.

July 15, 2016 was my L5-S1 surgery.  We had originally hoped to do another artificial disc, but by that time, the herniation was pretty complete, I was bone-on-bone, and the facet (the large, flat surface of the vertebrae) had advanced arthritis.  This meant that my only choice was to do a fusion. Yay! More metal in my body! 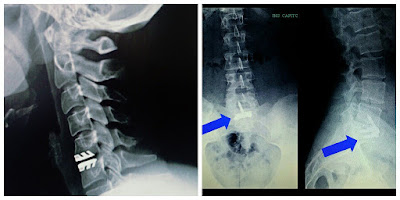 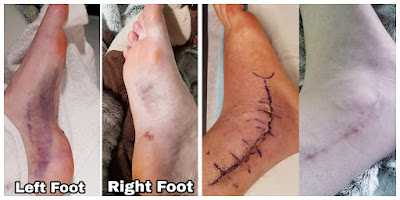 So all of that is the "Rehash" part of my blog entry.  What do I mean by "revolution?"

The U.S. healthcare system fails in so many ways.  But I want to talk about one way in particular:  we lack universal electronic health records ("EHRs"). (To answer your knee-jerk reaction -- countries that have EHRs tend to have better privacy technology).

My spine surgeon moved practice twice since I first saw him in 2012.  Unfortunately, this means that my medical records are in many different places (the different practices, the different radiologists, etc.).  Instead of my files traveling with my doctor (or better yet -- BELONGING TO ME), they've remained with each practice. This means that when I hurt my back last week and called to get an appointment with my doctor, they had no record of me ever being his patient.  **headtilt**

So I'm in pain and I'm now trying to re-constitute a medical file for my surgeon by contacting all of his old practices, the hospitals where I had surgery, and the radiologists that did my MRIs/other diagnostics.  I'm lucky that (1) I've kept a timeline of events, and (2) I've kept as many documents as possible in an annotated file.  But I can only how much someone would be screwed if they were starting from scratch.

The lack of EHRs slows down medical care.  It reduces coordination and collaboration.  It prevents patients from getting adequate healthcare, and it puts an unnecessary burden on people that don't have the spoons to deal with this kind of bullshit.
Tweet
Labels: spine