Home » About Me » Fitbloggin » The Path, The Dream, The Plan

The Path, The Dream, The Plan

in About Me, Fitbloggin - on 1:13:00 PM - No comments
I've spent the past two weeks binge watching all four seasons of Ugly Betty (aired from 2006-2010) on Hulu.  Some parts were a little hit/miss but some of it still rings true.

Last night I watched the series finale and it affected me a bit differently than it did the first time around.  The first time I saw it in 2010, I was wrapped up in her love life.  I was hopeful for her because if Betty could find happiness and a mate, then so could I.  This time around I was struck by Betty's central conflict of the last few episodes:  stay on the path where you're comfortable (and have some success/tenure) or do what you are passionate about?

In the last episodes she laments about not pursuing her passion project (blogging).  Sound familiar?
She also worries about what will happen to her family if she moves away (to London).  How will she fare in a place where she has to start over?

It started to make me think about the past 13.5 years in the same job (legal secretary) and in the same location (DC) and all the excuses and reasons I've relied on to help guide my decisions (either to stay or to go).  I'm currently in the "stay with the insurance that will pay for your next surgery" and "you have enough leave/FMLA" frame of mind.

I've also been thinking a lot about my health too.  There's complacency there.  It's hard to explain to people how hard the past 2 years have been.  Yesterday a colleague came to my desk to talk about his upcoming surgery.  He was always my cautionary tale of back surgery gone bad.  They're now taking out all of his hardware, cleaning up spurs on his vertebrae, and putting him back together.  He gets it.  It's physically and emotionally tiring to deal with chronic injury.

I also spoke with my general practitioner while at the physical prior to my foot surgery.  My blood results were amazing now that I've been gluten free for a year now (holy shit, just realized that now!!). 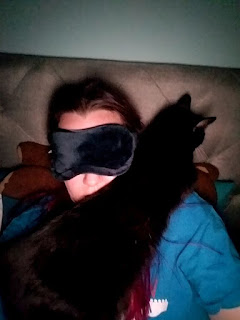 I am hoping that once my body recovers fully from the spine and foot surgeries, that I'll start actually feeling better and more energetic.  I miss going to the gym and being as active as I used to be.  I know that there are things I can do and adaptations that I can make, but my brain just isn't there. My brain is mainly trying to come out my eye sockets thank to allergy season and low pressure sinus headaches.  But Dr. Jack is handling that.