Home » About Me » Ruminations » Handle With Care

[Peyton ] Manning was not just frustrated that he had been cut off from the people in Indianapolis who knew his body best. He was also craving privacy. His arm had lost strength, his grip was soft, his triceps had withered after one of his earlier neck operations. It had all left him oddly vulnerable and isolated.

"I did not want people seeing me," he said. "It becomes a private, sensitive deal."

For those of you who are counting (okay, I know some of you out there don't like football...), Peyton Manning is finally returning to football after missing a whole season and having 4 surgeries on his cervical spine in the past 2 years to correct a bulging disc and the related pinched nerves.

Sound familiar? It should. 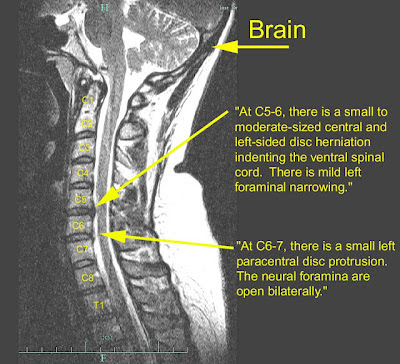 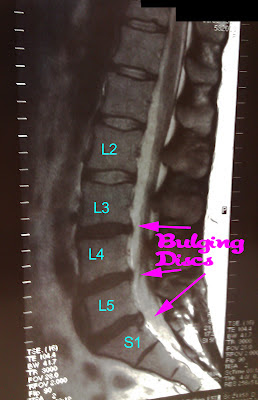 Peyton Manning had a spinal fusion and then revision surgeries. Of the surgeries available, this is the kind of surgery that I'm trying to avoid, but will most likely be encouraged to get because I have disc issues affecting mutiple levels. Fusion surgeries have high failure rates (i.e. they need revisions and/or don't actually alleviate pain). For my cervical spine, I've been trying to learn as much as I can about artificial disc replacement surgery. Seems like the jury is still out on it.  The technology is imperfect, but it seems like the sooner you do it, the better the outcome.

I hate feeling like I'm sounding repetitive here, but as I've written before, this is the biggest struggle I have in my weight loss/health gain journey.  Simply put, degenerative disc disease is a bitch.  Reading that story about Peyton Manning's struggles was a comfort in that someone who is a champion﻿ and other people's hero has struggled with this injury too.

I can handle injuries (see, e.g., the time I tried out for tennis after having sprained my foot in two places).  I can handle emotional trauma.  What I am having trouble with is an injury that will never fully heal and the ongoing emotional distress that it causes.  I know there will be good days, and there will be bad days. The good days are awesome.  The bad days suck.  Having a good day and wondering when the next bad day will come is nerve racking limbo. Having a bad day and wondering when the next good day will be is disheartening.

And riddle me this -- how do you wrap your head around feeling sexy and/or young when you feel so broken/fragile?  I've been chatting with a fellow (from OkCupid) and have been rather candid about my injuries.  It's hard to explain to him that it's not necessarily about weight loss.  If I were the same weight and had a healthy spine, I'd feel much better about myself than I do right now.  If I were at my goal weight but still injured, I'd still feel the same anguish that I feel now.  That make sense?

I'm not looking to run a marathon anytime soon.  I just want a good night's sleep, the ability to go to the gym, and a full range of motion.  I want to be able to hug someone without having to warn them to be careful.  That would be enough for me.
Tweet
Labels: About Me, Ruminations

Wow. I didn't know about this! I'm amazed that you're doing what you're doing - you're so inspiring! If Peyton can get back on the field (and win!), you can keep going. I hope for you: good nights of sleep, continued gym trips, and full range of motion. And lots of pain-free hugs.

Ant -- I hope I can keep on going... but keep in mind, Peyton had 19 months off the field. That long would make me go NUTS.
Exercise helps me stay sane!

I had no idea the degree of your injury/condition. I've been reading your blog since June-ish but was never really sure. I'm sending you a hug from nyc and hoping for you twice as hard.

It's very frustrating on all levels. For you but also people who care about you. I am one of those types that looks for answers, responses that will make you feel better and in your case I'm at a loss. I think full acceptance of how it is right now will let your head believe that you ARE sexy and young and vibrant. That's probably the hardest part though. It's not easy knowing that you may never know it will be better.

I have a book in Dutch that maybe you would like - I will see if it's available in English. Its called "the body is perfect" and written by a lady who is paralyzed. This book helped me absolute loads to accept who and how I am right at this very moment.

MANY MANY MANY HUGS from Texas.

I know we have spoken about all of this & compared OUR backs- but for me it's about moving & doing whatever I can to make myself feel better. Surgery is not an option for me-neither is medication! I choose movement, meditation, and living as stress free as possible to alleviate my chronic pain. xox stay strong & stay positive. :)

Miz: thanks lovie -- i won't be twirling you around this year :(

Tracey: I do what I can to make myself feel better, but even then it's really hard to stay afloat some days, no?

Robby, degenrative disc disease does suck and I'm so sorry you are dealing with this right now. So I guess the timing of fitbloggin couldn't be more perfect to give you an extra dose of support and love from birds of a feather who understand and care. Am sending you a gentle hug and writing a longer email too....

Wow - I think we could be one in the same (well almost).

Nobody knows how debilitating and depressing back pain is unless they've lived it. One minute fine, the next not. Look healthy on the outside, inside not. One word to describe it: SUCKS.

I was in an accident when I was 16. Had a spinal fusion done at 20. L3-L5 never the same since. Never a day without pain but I've learned to live with it. Now I have herniated discs in my cervical spine and three damaged nerves. Could be from the accident years ago since I've always had burning in my shoulders since then...but never did anything about it until recently when the migraines came on, with a vengence.

Just did my first round of epidural injections, have two more rounds to go. If it doesn't work then surgery is the last resort.

I feel your pain and wish you resolution in the near future.

I'm not sure how I stumbled across your site, but sometimes the internet can be just as good as it is evil. Until recently, my neck images could easily be mistaken for yours (same levels, same herniations....) In October 2011, I had exhausted all options and had surgery. Unfortunately, that surgery failed, leaving me worse off than I was post -op. Fortunately, after an insane amount of research, I found a reputable surgeon in Europe who as able to fix me up as good as new this past Sept. Here's a link to documenting my suffering before my medical tourism to europe: http://ireport.cnn.com/docs/DOC-827158
I wish you the best, nobody should have to live in pain. please contact me if you have any questions or just want to vent. I know how you feel, and my heart goes out to you!