Start with the Joy

in Advice, Boxing, Family - on 12:47:00 PM - 4 comments
People always ask me, "I'm just getting into exercising.  Where should I start?" when it comes to weight loss/health gain.  Sometimes I give a bit of a serious answer—that you need to have a strong foundation, or that you need to have the mental epiphany first—but when it comes to moving your body, I have one answer:  Start with the Joy.

This past weekend, I had an occasion to reiterate that point to my dad.  Dad was coming down to DC (from NY) to visit for the weekend. I told him to bring workout clothing.  My hope was that the hotel had a gym and I could have him show me what he learned in physical therapy and what he could do.  Alas, the hotel didn't have a workout facility (it is a boutique hotel).

Since it was such a GORGEOUS day on Saturday, I figured that we'd make the best of the situation and go for a walk and have a little talk.  As often people are when they're met with something outside his or her comfort zone, Dad was a little testy with me to honor his limits.  I reassured him that I wasn't going to kill him (there goes my plans for 30 seconds of light jogging here and there!).  I wasn't going to go easy on him either. 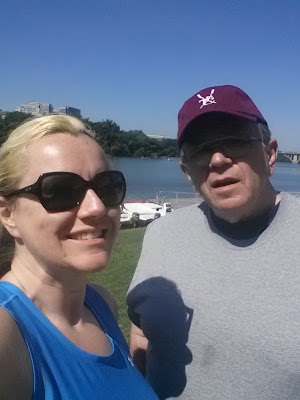 We went through some of the historic and commercial areas of Georgetown and down by the waterfront.
As dad looked out on the water, he got excited to see a
1-man rowing scull. His eyes got big and he started smiling as he described his time in college on an 8-man rowing team.

We walked down to Key Bridge Boat House (formerly Jack's Boat House), but they only rented out kayaks, canoes, and stand-up paddle boards.  I pointed all the way across to the other side of Georgetown at Thompson Boat Center and told dad that I bet that's where the sculls were being launched and I was right.  Not only were they launching them from there (2 colleges and a bunch of other schools), but you can rent 1 and 2-person sculls by the hour.

However, because it's not as intuitive as kayaking or canoeing, you have to be certified -- which means either taking a beginner's class or being evaluated by an instructor (for someone that hasn't sculled in a few years). 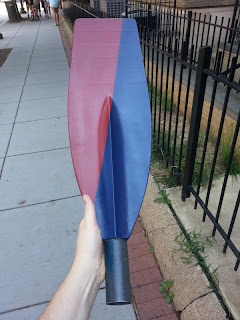 Getting out on the water with Dad is probably not going to happen this year, but the first classes of spring are in late April/early May of 2014.  That give Dad around 8 months to get in shape.  We made a deal right there.  I decided to buy dad a hat to mark the occasion (and because it was recently his birthday) and remind him of the excitement he felt.

When purchasing the hat, I thanked the manager for giving my dad something to be enthusiastic about.  He then asked me if I wanted an oar.  Dad thought he was selling me the oar, but he was giving me the oar.  Yet another memento, something to hang on the wall as a reminder of what is to come.

Later that day, we visited with my brother, sister-in-law, and my niece and Dad recounted this story only to find out that my SIL rowed in college as well.  Oh, and by the way, I spent my 29th birthday kayaking, and have kayaked in the Carribean.  My brother and SIL have gone kayaking a few times as well.

Dad thought he surprised us by telling his tales of rowing past, but I think the bigger surprise was that Dad found out that he wouldn't be the only one out there in the water.  (ahem, bigger lesson there along the lines of "you are not alone" and that there's always someone willing to travel part of the journey with you)

So the moral of the story is this:  when you're first trying to change how you view exercise, start with what excites you and brings you joy.  You're more likely to have a positive experience, more likely to want to get better at doing it, and you're more likely to stick with it in the long run.  The mind-fake (i.e., the lesson you learn by accident) is that exercise is not punishment.  It's a celebration of what your body can do.


I'd love to hear the kinds of activities that bring you joy.

I dance! Walking is nice too.

I've read your blog (backwards - but all the way through), and it is so awesome to see your dad doing this! :D It looks like you two will have a lot of fun next year.

I was a figure skater, but I'm 32 and you know, fat now, so guess I enjoy walking the most. I try to get in between 5-8 miles, six days a week. I also like dancing with my 2 year old, bowling, and I have a feeling there is a whole lot more. I just need to get out there and try it!

I found your blog from Pacers' Facebook. First, they're so wonderful and I'm so happy others find them as helpful and welcoming as I do. Second, I read this post and you're absolutely right, it is ALL about the joy. So wonderful to see people interested in healthier and happier lives. For whatever it's worth, when I track a run, I identify the mileage, my route, and the BEST part about it. When I feel unmotivated I take a look at my list of happy moments - seeing a sunset from the Lincoln Memorial, a cool breeze along the Potomac, running into a friend on the Mall, or maybe just that it felt super good that day - and it helps me lace up and get out the door. I've started doing this for all exercise and it's so wonderful to look back at the good stuff. Best of luck with all you're doing!!

Natalie: I love to walk and I walk everywhere! It's always nice to have someone to chat with on a walk.

Zaby: Wow, hopefully it wasn't too confusing. I seem to go in a non-chronological fashion and so things should make some semblance of sense :P Have you tried getting back on the skates?

Cameron: Welcome to my blog. **pats on sofa** make yourself at home. They were super helpful and welcoming to me. Sometimes I'll go into a store and I don't look like the target consumer and so sales associates will ignore me. It was great that Tripp walked right up to me and asked if he could help.

I know so many people who are wrapped up in the weight loss aspects of exercise that they forget to have fun. They forget that they move to really celebrate their bodies, and what it means to be healthy.

I'm super slow at this point (trying to protect my back) -- but i'm proud that I ran yesterday for 2 miles and averaged 10:50/mile. My average elliptical speed is 8:40/mile. Slow and steady, right?

And you're 100% right -- if you can't stop to smell the roses, what are you doing out there in the first place? (this is the other picture i took during my inaugural run: http://twitpic.com/dbfjlu)